"An Encounter" by James Joyce 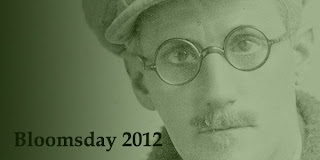 Bloomsday 2012
Third Year of Observation on The Reading Life
The Irish Quarter Year Two
A Celebration of the Irish Short Story
March 11 to ?

Bloomsday takes place on June 16 in honor of June 16, 1904, the day on which James Joyce's Ulysses  takes place.   The day is observed in literary venues all over the world, sometimes with all day readings from the book.   Irish pubs throughout the world honor this day and there are well organized observations in lots of places.   A number of book bloggers post something on Joyce every June 16 in honor of the day.   In 2010 I posted on "The Dead".  In 2011 I read "Evangeline".   This year I am posting on the second story in Joyce's Dubliners (without a doubt the most influence collection of short stories ever), "An Encounter".


"An Encounter" is a marvelous story narrated by a young school boy about the day he and his friend Mahoney skipped school to spend the day at the seashore, a very big thing for them and quite daring in the face of what would happen to them if they are found out to be taking a day off from school.    The story centers on the things they do and the people they encounter, especially a rather odd, man who gives them a rather bad creepy kind of feeling.   As the conversation begins the man is talking to them about sort of normal things like Sir Walter Scott and asks them if they have any "sweet hearts".    At one point, this happens off stage so we are using our imagination here, the man leaves the boys but stays in sight and he seems to engage in auto-erotic activity.   The boys are shocked and do not quite no what to make of this.  Now the man returns and begins to question them more pointedly about sweet hearts (while also insulting them by suggesting they are public school boys) and tells them he would beat any boy who he knew had a sweet heart.


The story is, of course, exquisitely written.    It is not just about the two boys.   It is about poverty, the conflicts of Catholics and Protestants in Ireland, class distinctions in society, about a very odd old man, and about growing up.


All of Joyce's work is now happily in the public domain and you can easily download a copy of The Dubliners.

Thanks for the Bloomsday reminder, Mel. Just pulled Dubliners from the shelf and will read a story today - no Ulysses for me!