"Girl in The River Sallies" by John Sexton

"Girl In The River Sallies"

For seven nights in a row he dreamt of an old man building a cage of thistles in the rough fields beside a river. As the old man worked, his hands torn from the handling, gray thistle seeds, like feathered moons, rose out from the cage. All the time that he worked the old man sang a song, just one verse over and over:
You speak the speech of muted stones,your face is passive, hard;no birdsong tumbles from your tonguebut birdsong ’s what I’ve heard
He had no idea what the dream meant. Each morning he would wake, the pale yellow walls of his room brightening in the sunlight, and would ponder the dream. But after the seventh night’s dream he went from the house with nothing in his pockets but the space for his hands and took the overgrown lane into the village. Beyond the village he asked a jackdaw for directions, not expecting an answer because he was only fooling, and no answer did he get.
As the day went on the wind increased and he had to turn up the collar of his coat and tie the buttons all the way to his throat. By midday the sky had turned dark and it began to rain in great slicing sheets.

Several miles from the village he turned off the road to get shelter from the rain. A thick ribbon of trees fringed the river that paced alongside the road, so he made for their cover.
Dizzy to its brim with floodwater the river tumbled triumphantly. He stood on its banks, amazed at the noise it was making, when something caught his eye. On the far side of the river a young woman was tangled hopelessly in the branches of willow that trailed its edge. She waved at him frantically, her body trapped in the thick osiers of sally. He strained to hear her voice but could make out nothing above the sound of the river. He stepped forward awkwardly, misjudging a jutted root, and, in that moment, slipped into the rushing waters.
Beneath the surface of the water all sound was gone. Nothing mattered. Nothing was. The river became seven nights of dreams. An old man built a cage of thistles. Gray seeds like feathered moons rose into the air. The old man sang a song one verse long, over and over, over and over. 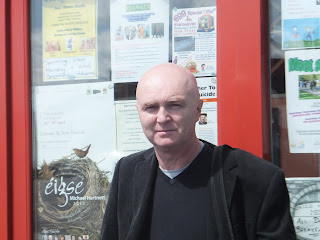 John W. Sexton was born in 1958 and lives on the south west coast of Ireland in County
Kerry. He is a poet, short story writer, dramatist, children’s novelist, radio scriptwriter
and broadcaster. He is the author of four collections of poetry: The Prince’s Brief Career,
Foreword by Nuala Ní Dhomhnaill, (Cairn Mountain Press, 1995), Shadows Bloom /
Scáthanna Faoi Bhláth, a book of haiku with translations into Irish by Gabriel Rosenstock,
Vortex (Doghouse, 2005), and Petit Mal (Revival Press, 2009). A fifth collection, The
Offspring of the Moon, is due from Salmon Poetry for Spring 2013.

He also created and wrote the science fiction comedy-drama, The Ivory Tower, for RTE
radio, which ran to over one hundred half-hour episodes. His novels based on this series, The
Johnny Coffin Diaries and Johnny Coffin School-Dazed are both published by The O’Brien
Press, and have been translated into Italian and Serbian.

He has recorded an album with legendary Stranglers frontman, Hugh Cornwell, entitled Sons
Of Shiva, which has been released on Track Records. He has been nominated for a Hennessy
Literary Award for his short fiction and his poem “The Green Owl” won the Listowel
Poetry Prize 2007 for best single poem. He was awarded a Patrick And Katherine Kavanagh
Fellowship In Poetry for 2007/2008.

I have previously posted two of John's stories.