The Irish Quarter:  A Celebration of the Irish Short Story
March 11 to ? 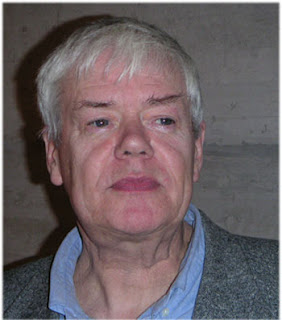 Anyone interested is invited to participate in The Irish Quarter.   There are links to 1000s of short stories on the resources page, some 200 years old and some written this year.   All you need do is to post on an Irish short story or related matter and let me know about it.  Guests posts are welcome.   Just contact me if you are interested.

"Life Drawing" by Bernard MacLaverty is another great story that William Trevor with his characteristic literary  sagacity included in his anthology The Oxford Book of Irish Short Stories.   MacLaverty (Belfast, Ireland 1942) is a very prolific highly regarded writer.

Bernard MacLaverty was born in Belfast (14.9.42) and lived there until 1975 when he moved to Scotland with his wife, Madeline, and four children. He has been a Medical Laboratory Technician, a mature student, a teacher of English and, for two years in the mid eighties, Writer-in-Residence at the University of Aberdeen.

After living for a time in Edinburgh and the Isle of Islay he now lives in Glasgow. He is a member of Aosdana in Ireland and is Visiting Writer/Professor at the University of Strathclyde.
Currently he is employed as a teacher of creative writing on a postgraduate course in prose fiction run by the Research Institute of  Irish and Scottish Studies at the University of Aberdeen.

He has published five collections of short stories and four novels. He has written versions of his fiction for other media - radio plays, television plays, screenplays. Recently he wrote and directed a short film 'Bye-Child

"Life Drawing" is another guilt driven story, this time the guilty is over a son's neglect of his aged and now dying father.   This story, told in the third person, is about what happens when Liam, a successful painter is called back to see his dying father.   He has not visited him for years.   After their mother abandoned his father and brother the father raised them alone, often working 12 hour plus days in his tobacco shop (lots of pipe smokers in Belfast) to take care of his sons.   He was a bad tempered man, with violent moods and swings.    His sons wanted nothing much to do with him once they grew up.   The other son moved to America and a kindly neighbor who noticed the father was not taking his milk in came in to check on the father (they had a key) and found he had been the victim of a terrible stroke.     She found the phone number of the son in America and he called Liam.  The other son will not be coming for the funeral.  Liam's father always told him his ambition to be a painter was just a dream, he told him if he wanted he could always paint on the side.  As the years went by and Liam began to have private shows he would, as much for spite as anything else, send his father the notices evidencing his success and proving his father wrong.

The power in this story is seeing the son trying to come to terms with his guilt over abandoning his farther.   He knows it was not right for the father to violently stab him with a fork for next to nothing and he never got over this but he also knows the father never spent any money  on himself (even though he easily could have) but used all he made to take care of and educate his boys, who left him in the dust as soon as they could.

There are a pair of older sisters in the story who see the father as just a wonderful man and they do see like wonderful neighbors.   They add a lot to the story.

There is a lot in this wonderful story.   MacLaverty has generously included a complete short story on his web page for anyone wanting to sample his work


I hope to read more of his work in the future.

Its like you read my mind! You seem to know a lot
about this, like you wrote the book in it or something.

I think that you could do with a few pics to drive the message home a bit,
but other than that, this is great blog. A fantastic read.
I will certainly be back.
Also visit my webpage ; skin care equipment

McLaverty is a great short story writer. His novel 'Grace Notes' is worth a read too