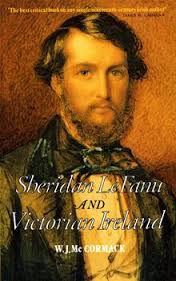 Sheridan Le Fanu and Victorian Ireland by W. J. McCormack is not just a superb biography of one of the most influential Gothic and Horror writers of all time (1814 to 1873) but a very detailed highly informative account of the social world of Victorian Ireland.  It goes very deeply into explaining the business side of Le Fanu's work, how he made money from his writings, how his life was influenced by his family (his great uncle was the dramatist Richard Sheridan), especially by the job of his father as a Protestant cleric at the time of rising rebellion against policies like the ones that required Catholics to donate ten percent of their income to Protestant churches.

The le Fanu family was in an unusual position in that they were Catholics but they were not Anglo-Irish but descended from French Huguenots.  This meant they were not fully accepted by the ruling protestants classes of the time while not being a part of the Catholic majority.  It was almost as if le Fanu grew up in the worst of both worlds, disliked by many as a Protestant but not accepted as an equal by the Anglo-Irish.  McCormack goes into a lot of detail explaining how these sort of feelings manifested themselves in his work.  He also explains the dynamics of the family he grew up in, his marriage to the daughter of a prominent publisher, his business dealings with the journals of the times, and the impact that the mental breakdown of his wife had upon him.

We do not quite know what happened to his wife.   In many of the stories and novels we see a deep feeling of horror about impending sexual relations or see them as destructive of one's psyche.  We see this clearly in the character of Carmilla, the first lesbian vampire.  There are numerous malignant female characters in the stories of le Fanu.

McCormick acknowledges it, and I have even seen it in some readings I have done for ISSM3, that much of le Fanu's output is not especially good.  His output was huge.  There are e-book editions of his works you can buy at a very fair prize that come to over 5000 pages.  McCormack says his best, and maybe only worth reading novel is Uncle Silas and he devotes a lot of time to relating this work to what we know of the life of le Fanu.

This is very detailed book.  McCormack does not say anything he is not prepared to back up in detail.  He does indulge in pschological speculation about why le Fanu makes use of the certain recurring themes over and over.  He admits we cannot be sure what was in the mind of le Fanu but it all seemed quite plausible.

This books lets us see how he lived, what it felt like to be the child of a rector from a famous writing family, to go through periods of prosperity and hard times.  It lets us see how the mental illness of his wife impacted his work.  (There are a lot of scary women ghosts and evil faeries and such in his work.)  I see this book as essential reading for anyone with a serious interest in 19th century Irish literature.

This work is published by Lilliput Press.  Lilliput press is the premier publisher of quality books about Ireland and Irish literary writers.