"If you're wanting to see the wonders of Ireland, the lakes and the hills.  Blue as blue skys, the lakes.  That's where you want to go, Killarney."

"The Bride of Innisfallen" by Eudora Welty deserves a place of honor during Irish Short Story Month III.   It was the lead story in a collection of short stories of the same name that Welty dedicated to her very good friend Elizabeth Bowen.  Welty spent  a summer at Bowen Castle and might even have written this story there.  "The Bride of Innisfallen" is set on a train in England.  The train takes people from London and stops on the way to Fishguard where they can catch a boat to Cork, Ireland.

The action of the story takes place in a compartment in the train.  Some of the people are Irish who cannot wait to get home, one is an American lady on a tour.  We also meet a man from Connemara.  The great fun of this story is listening to the people explain why they are going to Ireland.  Some have made the overnight voyage several times, others are nervous about their first trip.  The Bride of Innisfallen is the name of the boat to Ireland..  We see the prejudice against 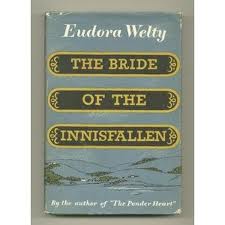 the Irish when a Welshman on the train tells the American woman that Irish is not a real language and it is a waste of time to learn it.

One of the women on the train shares her food and everybody bonds, accept the Welshman.  The Welshman asks if the others in the compartment consider Ireland a Catholic Country.  Finally a young Irish woman has had enough and she says she has six aunts living in England and they all hate it.

There is a lot more in this story.  The conversations are perfect and we get a real feel for the train trip.  Welty loved Ireland and it shows in this wonderful story.

Must read this! Thanks Mel.