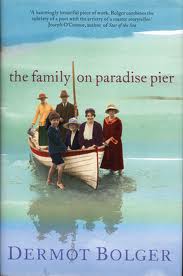 The Family on Paradise Pier by Dermot Bolger (1959, Dublin) is a magnificent epic tale that spans thirty years in the life of a Donegal, Ireland Family.  It does several things wonderfully, it presents a grand sweep of Irish and European history starting from 1913 or so and see the family through to the early 1950s.  The novel is based on an actual family the author met thirty years ago, The Goold Verschoyle family.

The family is richer than most of the people in the area, rich enough to have servants.  There are three brothers and one sister.  Two of the brothers become communists out of a sense of guilt and their perception of the moral rightness of communism under the leadership of Joseph Stalin.   The novel covers a lot of ground, from the years of the Irish Revolution and the Civil War and the time of troubles up to World War Two and beyond.  The novel begins in Russian on a displaced person's train bound for a Gulag.   In a Kafka like scene, the most dedicated to communism brother is arrested while he is living in Moscow with a Russian wife and child. When he protests his innocence and demands to know what his crime is, he is told that by protesting his arrest he is claiming the authorities can make a mistake and thus proving he is a subversive.   Even under the most brutal treatment, he never deviates from his devotion to Stalin and communism.   The scenes in Russia are very brutal, depicted with cinematic realism.  The one brother's devotion to Stalinism is just maddening.

The book moves from one family member to another.   The daughter develops romantic feelings for a soldier from New Zealand and Bolger does wonderful job of letting us see her feelings develop as she matures into a young woman.   The chapters designate the time and place of the events, sometimes we flash forward two or three years or move from the family and its hardships during the war years to one of the brother times fighting the fascists in Franco's Spain.   His depiction of these times was a good as Orwell's if not better.   He shows the mixture of reasons men were in the war.  There is a really well done trip to a brothel to make sure a young Irish man does not die a virgin.

Structurally the lives of the family parallels the history of Ireland.  Bolger made these years very real to me.  I felt the hardships, I admired a well off older woman who loved tea but would not buy on the black market when her rations ran out even though she easily could have.  There is a minor character in the novel that I came to really like even though we knew nothing about him.

A family decides to star a hunting lodge B and B from an old house they fix up.   A man shows up planning to stay just for the night and ends up staying ten years.  The amazing act of kindness that is the last thing we see him do is just so powerful that I was so moved  by it  I gasped and wished so much we knew more about him.   It is part of the great talent of Bolger that he leaves the man a mystery..     He becomes the confidant of the family even though he always remains formal.  The father of the hunting lodge family wants his son to be a real Fitzgerald which means he has to love hunting.  He is deeply ashamed when he learns his son hates shooting rabbits.  The character of the son is developed in a brilliant fashion in just one of the many small touches that makes this such a great novel.

This is a very rich novel.  The characters are very well developed, I care about them while being a bit infuriated with the communist brother.  Not for any ideological reasons but for their sheer blind fanaticism.  It also helped me to understand some of the reasons Ireland remained neutral during WWII and to see how this felt to the citizens, many of whom did know that if Hitler won the world he was not going to see Ireland as a friend.   To me the actions of many of Ireland's politicians and the Irish flirtation with fascism seems sad and not something to be proud off but I am an outsider and I only understand their hatred for the English on an intellectual basis.  It was very interesting in that the head of the family that started the hunting B and B said he liked individual Englishman as long as they were good fellow who liked hunting and a pint, he just did not like the country and the people as a whole.

I totally endorse this book to anyone interested in Irish history.  The characters are very well developed, exiting things happen to them, they develop as persons and it is great to see how their relationships of the three brothers and the sister transform over the thirty plus years the book covers.  It is not just bland history, we see how people lived, what they ate, how they coped with good and bad times, how family members kept loving each other no matter what they did. This is a good book in every way in which a book can be read.  I hope to read more of the work of Bolger soon.

I found your review while looking for reviews of this book which I've just read and greatly enjoyed. I knew one of the members of this family and heard many of their stories and am so impressed with how the novel is both true to the family as well as intent on shaping their lives with narrative integrity.