Veronica Li, author of a wonderful book, Across the Four Seas:  A Chinese Woman's Search for Home, in honor of Mother's Day is making her book free as a Kindle edition.   I loved this book.  Here is part of what I said about it.

Journey Across the Four Seas - A Chinese Woman's Search for Home by Veronica Li (2007, 298 pages) 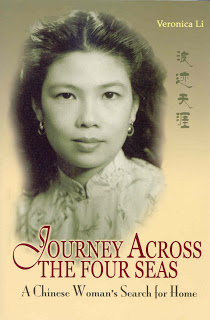 Journey Across the Four Seas - A Chinese Woman's Search for Home by Veronica Li is a wonderfully done look at the life of the author's mother, Flora Li.   The story opens a few weeks before the Japanese attack Pearl Harbor and declare war on the USA and on England.    Flora Li was living in the British Crown Colony of Hong Kong (1941) when war broke out and there were immediate rumors of a Japanese invasion of Hong Kong.    The citizens knew of the horrible way the Japanese had treated the citizens of Nanking,  China killing 100,000s of thousands of unarmed soldiers and civilians.   They also made rape a terror tactic of the war.   They knew Hong Kong had no army ready to defend it and they would be captured. Veronica Li does a wonderful job of recreating the atmosphere of Hong Kong in 1941.   Her mother was a student at Hong Kong University and did not really have a care in the world.    Flora Li had light skin, a very attractive feature, and was considered quite pretty.    Once this was a great source of joy and pride to her family.   Now her female relatives rub soy sauce all over her face and arms to make her appear darker and ugly in the hopes she could avoid being raped or sent to a Japanese  Army brothel.    In time she realizes she needs to escape Hong Kong for the parts of China that are not controlled by the Japanese.     As the story progresses I saw how much connections, family first then school and regional ties determined to a large extent who survived and who did not, who prospered, and who married who.

FREE MOTHER’S DAY READ: A Mother’s Memoir
Journey across the Four Seas: A Chinese Woman’s Search for Home by Veronica Li
(Free on Kindle May 11 and 12 http://tinyurl.com/43ycrkj)
Journey across the Four Seas is a true story of my mother’s life.  While caring for her in her last years, I recorded her life stories and wove them into a memoir.  It was my way of thanking her for all that she’d done for me.  The book is about her struggle to get an education for herself, and later for her children.  She believed that education was a means to a quality life.
My mother, Flora, was born of a poor family in Hong Kong in 1918.  In spite of being told, “Girls don’t go to school,” she fought her way through the education system and became one of the few women to enter the prestigious Hong Kong University.  When the Japanese invaded, she fled to unoccupied China, where she met her future husband, the son of China’s finance minister.  She thought she had found the ideal husband, but soon discovered that he suffered from emotional disorders caused by family conflicts and the wars he had grown up in.  Whenever he had a breakdown, Flora would move the family to another city, from Shanghai to Hong Kong to Bangkok to Taipei and finally across the ocean to the U.S.  Meanwhile, she gave birth to five children in different places.
Throughout her migrations, Flora kept her sight on one goal—providing her children with the best possible education.  For the sake of their education, she was willing to uproot herself and bring the family to the U.S.  Because of her courage, my siblings and I got a good college education and are living out the American dream.


My Post on Journey Across the Four Seas: A Chinese Woman's Search for Home by Veronica Li

I am very honored to be able to offer this book to my readers.