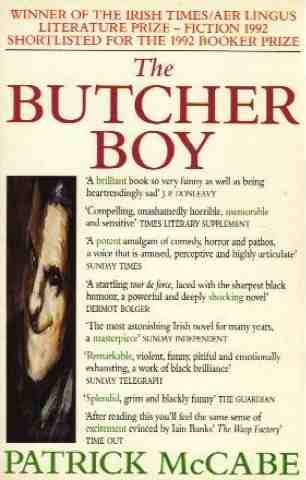 Butcher Boy is the second novel my Patrick McCabe I have so far read.   The first was Call Me the Breeze.  Butcher Boy is by far his best known work.   It has received praise from many sources and won or as shortlisted for several awards.

It is a kind of coming of age story of a psychotic killer set in a small Irish town.  In a way it is just another Irish story of a weak vicious drunken father who takes out his frustrations in life on his wife and son but it is so skillfully enters the mind of the central character that it transcend this category of novel.  Much of the story revolves around a family that looks down on the family
of Francis and his terrible hatred for them.   The story is narrated by Francis and his perspective on life is psychotic, violent and very cramped.  I would not describe this as a pleasant read but it compelling and you will be forced ever onward as things get worse and worse until a terrible senseless conclusion is reached.

Butcher Boy is, I think, a modern a Irish must read.  There is extreme violence in this novel.  There is a lot of material about pigs and their slaughter as Francis works as a pig killer.

I will, I hope, read more of the work of McCabe.