2013 is not half over yet but if TransAnlantic  by Colum McCann is not the Irish book of the year then be prepared to be amazed by  what could beat it.  I have read four of McCann's six novels and some of his short stories.   The Great World Keeps On Spinning is his best selling and, I think, highest regarded book.  I am almost ready to say that, over all, TransAtlantic, is the best of his work.   I say overall as each of works has amazing segments and there  is significant stylistic variations within the novels and each are told through multiple points of view and contain dazzling segments. 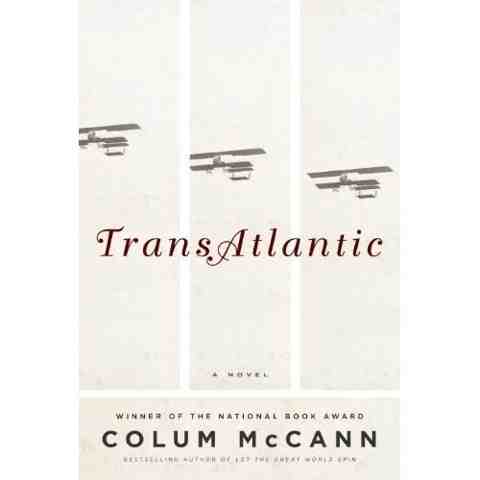 TransAtlantic tells three interconnected stories, some through four generations.  The way McCann makes the stories connect is just terribly clever and creative without being at all contrived.   All of the stories are very much Irish centered.  McCann makes use, as he did in Dancer, of historical figures in his narrative.  In Transatlantic Frederick Douglas (1812 to 1878), born into slavery in the American south and who in time became a central figure in the fight for the abolition of slavery through his speeches and writings, plays a very central role.
Even though the book is not yet officially released (I thank the publisher for offering me a review copy) the different narrative segments of the book have been outlined already in several places.   One thing McCann is just great at, painfully so in the opening of Dancer, is bringing the  horrors of war to life.  The book opens with a marvelous segment about two ex-WW I aviators and their attempt to make the first Transatlantic  flight (1919)   Both men suffered terribly in the war.  They bonded over their love of flight and the mechanics of planes.  Their plane was an old bomber.  The flight had to be done in under  72 hours to win a sunstatial cash prize. Their  route was to be Newfoundland, Canada to Ireland.  The flight across is horrifying but some how exhilarating.   They lose heat shortly after taking off, parts of the plane begin to separate, they have no way to communicate with each other but through gestures, and hardly enough food for the very long trip.   Before they leave, they meet a mother daughter team of journalist and photographer that will play a big part in the narrative.  If you have every agonized or complained your way through a very long flight, you might not after reading of their experiences.  I admit I loved it when the plane landed in a bog in Ireland.   It was all so exciting.
The second segment of the book, you do not realize the connection between the first and second segment for sometime on, focuses on the visit of Frederick Douglass (1818 to 1895) to Dublin in 1845 to raise support and money for the movement to abolish slavery in the United States.   Douglas was a brilliant speaker and there is also an underlying fascination with his background and life story.   He is the guest of a wealthy very liberal anti-slavery family and is first shown only the parts of Dublin they want him to see and is given access only to the elite.   Douglass soon begins too see the horrible poverty in which most  Dubliners live, he begins to directly relate to the Catholic poor of Dublin.  During his extended and financially successful visit he comes to see the start of the first famine when the potato crop fails.  This has been described before but it needs to be redone regularly least it be forgotten and McCann predictably does a great job.  Douglass leaves Ireland knowing the country even during the worst of the plague produces three to four times enough food needed to feed the population.   Much of the narrative turns on an Irish maid who got the courage to leave for America from Douglass.  We will follow her family through generations, her experiences as a civil war nurse in America are just amazing well done.
The final narrative segment centers on a very powerful American senator who President Bill Clinton has asked to try to bring peace to the warring sections in Northern Ireland.  It is a good look into the power brokers of the time.   If forced to, I would say this might be the weakest segment but maybe I just need to read it better.
Each of the segments and the people in them are connected in ways I did not see in advance.  There are terribly sad things in this book and equally wonderful events.
One of the things the book could be said to be about is how random connections can shape generations of people.   It is very much a historical work about what it means to be Irish, about the diaspora, about class distinctions, about the changing face of modern Ireland, and it even deals with issues related to the fall of The Celtic Tiger.
My prediction is that this book will be an international best seller and will rightly win numerous awards.
I cannot really visualize anyone into quality literature not liking this book and devotees of Irish fiction should treat it as a must read.
I have a copy of McCann's Songdogs and hope to read it soon.
Please share your experience with McCann with us.
Mel u

I love Colum Mc Cann's work. 'Let the Great World Spin' was simply stunning - stylistically and thematically. Every sentence is so easily and deftly stitched with significance, that the prose shimmers and stuns, almost to the point where you have to proceed slowly to fully inhale it all.
And the stories are remarkable in how they so perfectly inter-connect.

I was very lucky to meet him last week at a reading! And listen to what he had to say about the new book 'Transatlantic'. He is without doubt, one of the best contemporary writers around.

I've read This Side of Brightness and, recently Let the Great World Spin and enjoyed both. Looking forward to this one. Does Daniel O'Connell appear in the Douglass section?

Seamus Duggan. Yes O'Connell makes numerous appearances in the Douglass section.. Thanks as always for your

Siobhan. McCann is an amazingly talented writer. It must have been great to hear him read. Thanks so much for your comment.