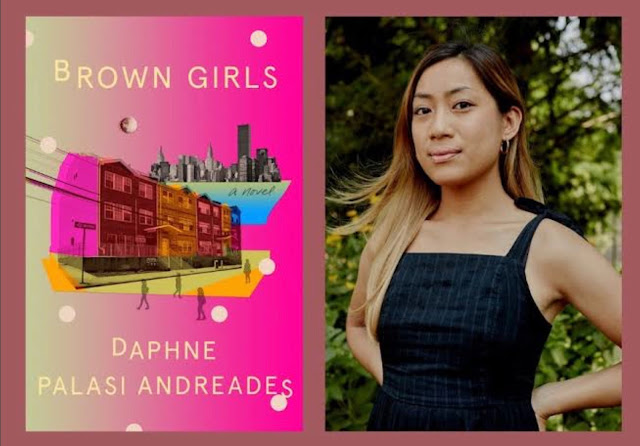 I first encountered the work of Daphne Palasi Andreades in The Best Short Stories 2021- The O. Henry Prize Winners - guest edited by Chimamanda Ngozi Adichie.  Her debut novel Brown Girls has it origins in her Short Story of that name included in this collection.

I first encountered the work of Daphne Palasi Andreades in The Best Short Stories 2021- The O. Henry Prize Winners guest edited by Chimamanda Ngozi Adichie.  Her debut novel Brown Girls has it origins in her Short Story of that name included in the collection.

Set in Queens, New York, a city with a highly diverse population of first and second generation immigrants from places once colonies of western powers.  The bond among the immigrants is the relative darkness of their skin, they call themselves “Brown Girls”. They come from India, Chad, the Phillippines, Mexico, the Dominican Republic, China.

Brown Girls is narrated in the first person plural, by a collective voice of “Brown Girls”. We follow them from six to sixty plus.  They speak English and often interpert for their parents.  We see The Brown Girls roaming the city, singing the songs of Mariah Carey, developing crushes and trying to be the good  daughters their mothers want.  Their mothers work as health providors, maids, factory workers.  Their fathers are construction workers. We see the Brown Girls getting Phds, becoming teachers, attorneys and doctors, married to White Boys, living in White neighborhoods. Some are Gay. Some stay close to their parents, others go years with little contact.

We travel to their home Lands with them. They feel they do not truly belong anywhere but in the Union of Brown Girls.

Brown Girls is an exquiste work, as much a long prose poem as a novel. I see it as high art.

“Daphne Palasi Andreades (she/her) is the author of the debut novel, Brown Girls, which published in the U.S. on January 4th, 2022, with Random House, and in the UK and Commonwealth with Fourth Estate. International editions of the book are also forthcoming in Germany and France. Daphne is a graduate of CUNY Baruch College and Columbia University’s MFA Fiction program, where she was awarded a Henfield Prize and a Creative Writing Teaching Fellowship. She is the recipient of a 2021 O.Henry Prize, and scholarships to the Bread Loaf Writers’ Conference, the Sewanee Writers’ Conference, Martha’s Vineyard Institute for Creative Writing, where she won the Voices of Color Prize, and other honors. Her fiction often explores diaspora, immigration, and the far-reaching effects of colonialism and imperialism. She is at work on several projects, including her second novel, short stories, and a few multidisciplinary/multimedia works. She lives in New York City.” From https://daphnepalasiandreades.com/bio/