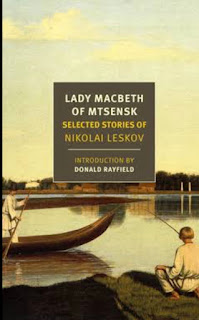 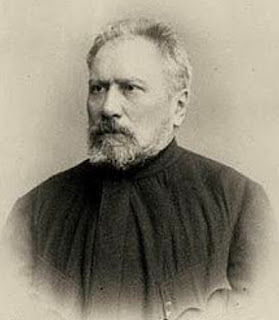 He lived for eight years in Kiev where he began to write for Ukrainian and Russian publications.  His wife was born in Kiev.

The collection also includes The Enchanted Wanderer and The Steel Flea as well as three other works besides Lady Macbeth of Mtsensk.

“NOW AND again in these parts you come across people so remarkable that, no matter how much time has passed since you met them, it is impossible to recall them without your heart trembling. One such person was Katerina Lvovna Izmailova, a merchant’s wife who was once the center of a drama so terrible that our local gentry, taking their cue from someone’s lighthearted quip, took to calling her Lady Macbeth of Mtsensk.”

As Robert Rayfield says in his very well done introduction, Leskov, as did Turgenev, recast famous Shakespeare characters in Russia.

I was shocked by muderous brutality of the central female character in this story, a woman consumed by jealousy.

Katrina is bored with her life as the wife of a lumber merchant, much older than herself. He is away most of the time.  She starts a romance with one of her husband’s workers. When Katrina’s father in Law later finds them in bed together, a fight ensues in which Katrina and the man kill him.  They bury him Right away so no one can see his wounds.  From this two more murders follow. Bringing about a trip to Siberia for Katrina and her lover.

Levkov vividly brings to the plot the pervasive corruption in Russia.  People are out for themselves only.

Chekhov and Tolstoy greatly admired the work of Leskov.

“Lady Macbeth of Mtsensk”  is a masterwork.  I look Forward to reading more by Nikolai Leskov.