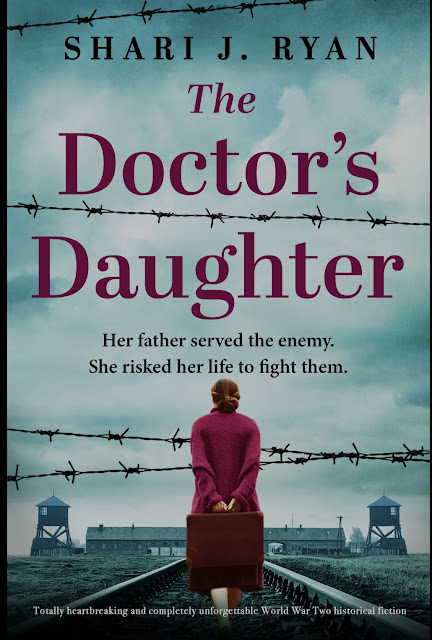 In March of this year I read The Bookseller of Dachau by Shari J. Ryan.  Today I am posting on my second of her Holocaust fictions, The Doctor’s Daughter.

Sophia, 16, and her mother are Jewish, her father is not, he is a Doctor whose job it is to protect the health of SS officers at Auschwitz.  Under German Law, his wife and daughter have protected status because of him.  Sophia and his wife lose their respect for him as they see the horrors done by the SS. He tells them his job secures them a protected comfortable life on their property near the camp.  Inmates from the camp are sent to labor on the mother’s inherited Family farm.  Sophia watches them digging in the ground, a young man just a little bit older than her catches her attention.  In the meantime, her mother invites the SS men guarding the workers to lunch.  At great risk Sophia begins sneaking food to the inmates, telling Issac about it in a letter.  She and Issac deeply bond.

The narrative is told through three points of view, in alternating chapters, that of Sophia, Issac and Issacs 14 year old sister Olivia.

Olivia and Issac, along with their parents, were deported from Warsaw to Auschwitz.  At entrance, they were seperated from each other and their parents.  Through their narratives we see the horrors of camp Life.  Olivia has a considered good job sorting things taken from incoming Jews, working a a huge warehouse called “Kanada”.

There are so many surprises in The Doctor’s Daughter..  Issac becomes part of Family.  After the liberation of Auschwitz the plot line advances to 1963.  Sophia, Issac, and Olivia are living in New York City.

I totally endorse The Doctor’s Daughter.

The people in this work seem completely real.  The close was very gratifying to me .  It is an exciting very moving book.

“Shari J. Ryan is a USA Today Bestselling Historical Fiction writer. Her desire to write stories revolving Jewish livelihood during World War II stems from being a descendant of two Holocaust survivors. After the passing of Shari’s grandmother, she pursued an active interest in learning more about the inherited stories she yearned to understand better.

Shortly after earning a bachelor’s degree  from Johnson & Wales University, Shari began her career as a graphic artist and freelance writer. She then found her passion for writing books in 2012. In 2016, Shari began writing her first Historical Fiction novel, Last Words, a story about a lifelong journey through the eyes of a Holocaust survivor. With two character related books to follow, Shari quickly found a new passion to share untold World War II stories with a fictional setting. “ from sharijryan.com

I hope to read more of her work soon.