“Part of a curated collection of forgotten works by early to mid-century women writers, the British Library Women Writers series highlights the best middlebrow fiction from the 1910s to the 1960s, offering escapism, popular appeal and plenty of period detail to amuse, surprise and inform.”  From The British Library

There are currently 15 works in the British Library Women Writers Series.  I am hoping to read through them in 2022. Most are fairly brief  and all include author bios and expert commentaries.  The Kindle Editions are under $4.00.

In the two previous works in The British Library Women Writers Series as well as the early works of Barbara Pym from the 1950s sharing tea has served as a bonding agent bringing people together.  People were often judged by the elegance of their tea service.  Tea is So intoxicating centers on the chaos brought to a small English town when a couple newly moved there try  to start a tea shop catering to high class hikers and bike riders.

Tea is Intoxicating is just such a huge amount of fun to read, the characters all are very real, warts and all.

It would not be fair to potential readers to give away very much of the plot.  There are fist fights over a woman, a terribly spoiled teenage daughter, Duck, raised by her indulgent father after his wife leaves him. There are accidents, people are badly hurt, a woman we love to hate tries to stop the tea shop.  David was an accountant for a chain of tea companies and he is convinced he will make a fortune setting up shop in a house he has purchased.  His wife is convinced otherwise. She left her husband Digby, father of Duck, for David and wonders if this was a mistake.

We see the obstacles of setting up a Tea Shop.  A cake cook, Mimi, from Vienna is hired.  She charms the men but the women hate her. The men see her as an innocent girl, but with great legs, the women as a potential man stealer. Slight spoiler, something really surprising comes out on her toward the end.  Her accent is really well done.  I found myself falling for her. Maybe with this novel published long after the others allusions to her figure catch our attention as not seen in earlier works.

We are in post war rural England.  There is still rationing,servants are hard to find and keep.  Divorce has just become legal.  Many of the men were in the war.  The rural aristocratic people, once very dominating, sees their world going downhill fast.

Mary Evans was one of the numerous pen names of Ursula Bloom, author of over five hundred works. Tea is So Intoxicating is considered her best work. 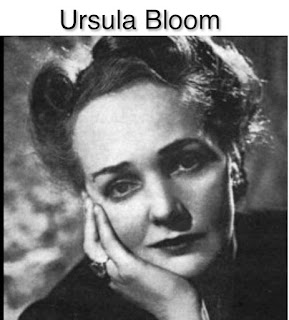