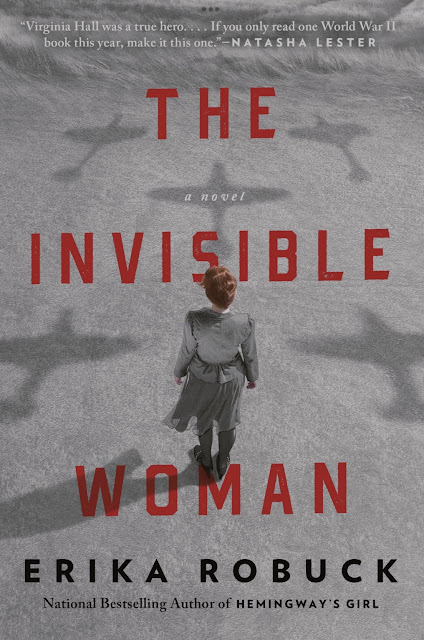 My prior works  by Erika Robuck read

Sisters of Night and Fog -2022.  Set also largely in France during WW Two

Receive Me Falling. - 2009- Set mostly on the Sugar Cane Plantations on the Caribbean Island of Natal.  Shifting from the 1830s to the 1990s.

The Invisible Woman centers on Virginia Hall, an American woman working as an agent for the British OSS.  Her mission is to support French resistance fighters in German occupied France.  In addition to courage, loyalty, and endurance she has a prosthetic half left leg.  She is in her mid-thirties, speaks passable French and dresses as a much older woman in case her real pictures fall into German or Vichy hands.  Most of the resistance fighters are under twenty.

Robuck vividly creates the terror of the war, the misery of wasted lives, the terrible cruelly of the Germans.  Virginia is involved in training the French fighters in sabotage and sneak attacks.  The numerous characters are very well developed.  Food is a very important concern.  There is an interesting romantic element.

Virginia’s activities can put her and others in danger if things go wrong.  There is a lot of tension in the events.  Virginia gets close to people even though this is contrary to OSS training.

I found The Invisible Woman kept me more and more interested as I came to love the resistance and hate the Germans.

I endorse this book with no reservations to all into World War Two literature.

Erika Robuck is the national bestselling author of The Invisible Woman, Hemingway’s Girl, Call Me Zelda, Fallen Beauty, The House of Hawthorne, and Receive Me Falling. She is also a contributor to the anthology Grand Central: Postwar Stories of Love and Reunion, and to the Writer’s Digest essay collection Author in Progress. In 2014, Robuck was named Annapolis’ Author of the Year, and she resides there with her husband and three sons.

I hope to next read her Hemingway’s Girl.