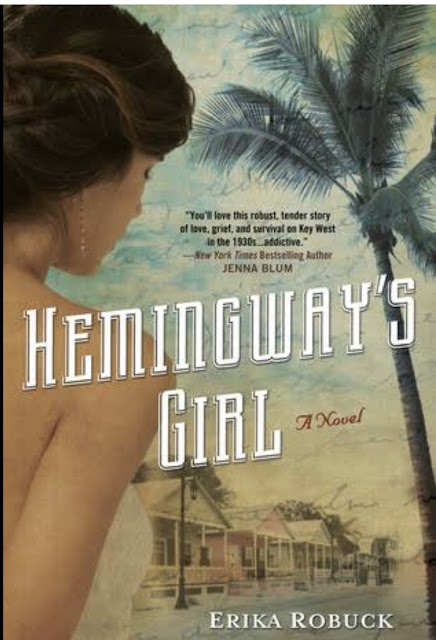 Hemingway’s Girl, a marvelous work of historical fiction, is set in The Florida Keys and Bimini from 1935 to 1961

This is fifth work by Erika Robert I have so far read.

My first four were

Sisters of Night and Fog -2022.  Set also largely in France during WW Two

Receive Me Falling. - 2009- Set mostly on the Sugar Cane Plantations on the Caribbean Island of Natal.  Shifting from the 1830s to the 1990s.

Ernest Hemingway (1899 to 1961) won The Nobel Prize in 1954.  He was married to Pauline Pfieffer from 1927 to 1940, she has a central role in Hemingway’s Girl. In the 1930s he lived mostly in Key West, where his fame and powerful personality made him into a local celebrity  and a tourist attraction.

the impact of The Great Depression, a ten year down turn in America. Jobs were very hard to get.  Maribelle is about 16 when we meet her.  Her father was very recently killed on his fishing boat.  Her mother was Cuban.  Her mother Eva is emotionally distraught.  Maribelle supports her and her two much younger sisters through work as a waitress and other various jobs.

Through a contact she gets a job as a maid for the Hemingway family.  There is also a cook and a governess for two young sons.  Mrs Hemingway is very much in charge as well as being quite possessive of her husband.

Hemingway, portrayed as ultra-macho, invites her to go to Sloppy Joe’s Bar with him.  She begins to become infatuted.  Her mother warns her.  Much of the story line follows Maribella’s developing relationship with him, his wife, and others in the Hemingway household.

In the mean time she meets a World War One Veteran, Gavin, working on the highway linking the Keys. He falls in love with her.  This relationship is kind of in competition with the one with Hemingway.

There are exciting developments in every chapter.  The depiction of the 1935 Hurricane that killed thousands is very powerful.  Anyone who ever lived through a powerful tropical storm will be mesmerized, as I was.

There is a fishing trip to Bimini which was a lot of fun to read about.  There are Prize fights, lots of heavy drinking, exciting fishing episodes, great food, unexpected romances and much more.  Key West in the 1930s is vividly brought to life.

Hemingway’s Girl is a fast moving work.  The charaters are very brought to life..  Hemingway readers will have their own reaction to his depiction.

There is great emotional depth in Hemingway’s Girl.

Erika Robuck is the national bestselling author of The Invisible Woman, Hemingway’s Girl, Call Me Zelda, Fallen Beauty, The House of Hawthorne, and Receive Me Falling. She is also a contributor to the anthology Grand Central: Postwar Stories of Love and Reunion, and to the Writer’s Digest essay collection Author in Progress. In 2014, Robuck was named Annapolis’ Author of the Year, and she resides there with her husband and three sons.

I hope to read her The House of Hawthorne in June.

Thank you not just for the review but for the links to the other books as well.