The Life and Opinions of Tristram Shandy, Gentleman by Laurence Sterne 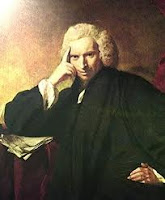 The Life and Opinions of Tristram Shandy, Gentleman by Laurence Sterne (1759 to 1769-539 pages) was considered a very odd book when it was first published and became all the rage in London.  (Sterne was of Anglo-Irish ancestry, born in Clonmel, Ireland-1713 to 1768)  Samuel Johnson, it one of his few mistakes, said of it "Nothing odd will do long", meaning the work will soon be forgotten.   Ezra Pound in his The ABCs of Reading listed it as among the greatest works in the world.   I first read it several decades ago, motivated in part by its inclusion in Clifton Fadiman's A Lifetime Reading Plan.  When I reread it this week the style came back to me and even some of the incidents as well as the strange obsession with noses.

I will just keep my comments very brief as there are lots and lots of learned men and women who have written about this book.    Basically I see it as one of the very first attempts to capture the stream of consciousness in a literary work.

In theory, it is supposed to be an autobiography of a fictional character.   The only problem is that it takes the narrator two volumes -it was published in five sets of two volumes from 1759 to 1769-to get himself born.   Sterne has all sorts of topical references in the work.   In part he is exploring and to some extent mocking  the limits of John Locke's ideas on the ways people acquire knowledge, the philosophical basis for English Empiricism.   There are all sorts of odd side trips and interesting characters.    I liked a lot the depiction of the relationship of Tristram's mother and father that we can put together from Sterne's passing references.   This is a very subtle book of high intelligence written in a very self-consciously artistic fashion.

The Life and Opinions of Tristram Shandy, Gentleman is a must read for those into the English novel.   Parts of it are very funny and parts of it are near x-rated and parts of it are deep explorations of history and psychology.   The book was condemned by many church leaders for its depiction of clerics.  (Sterne was a cleric).

The influence of the book is huge.   The biggest influences on Sterne were Cervantes and Rabelais, both mentioned in the book more than once.

This was a strange book 252 years ago and it is still a strange book now.    There is the infamous ten page gap, the "marble pages", all sorts of weird doodles, and some of the best conversations ever depicted.

The Life and Opinions of Tristram Shandy, Gentleman is not a "casual read while watching American Idol" type of book.   It does require a lot of attention to enjoy its very real rewards.

The Life and Opinions of Tristram Shandy, Gentleman (I read the beautifully done Oxford World Classics edition) is a truly original work.   If you are a fan of Virginia Woolf, you will like this book and see its influence for sure.

Whatever else it may be, The Life and Opinions of Tristram Shandy, Gentleman is a very high canon status work and I am glad I read it again.

I'm still in the midst of my first read through Tristram Shandy. I set the goal of reading one 'book' a month this year. I've fallen behind. I should be finishing it this month but I'm only on book seven.

Part of the problem is that I love it so much. I'll be very sad to read the end of it. I think it's one of the best books I've ever read. It might even replace Middlemarch at the top of my personal Panteon.

There is more where this came from. A Sentimental Journey is - well, sequel is the wrong word. A close cousin. And if that's not enough, see obooki.

Also, Brazilian novelist Machado de Assis was greatly indebted to Sterne. If, ahem, if anyone is interested in reading something Brazilian.

C. B. James-Tristram Shandy is a very original funny wise book-I will look forward to your comments on it

This book definitely falls into my 'books im too scared to try' category despite the itneresting things I hear about it.