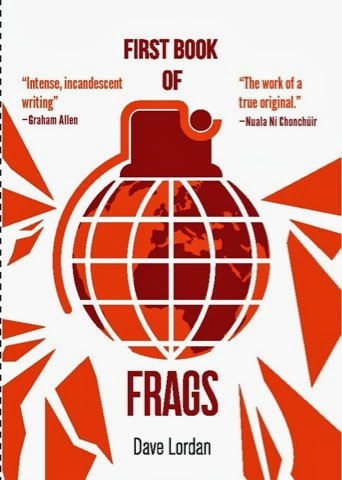 Today I am very happy to be able to share with my readers a short story by Dave Lordan.  I first became acquainted with his work when I read his The First Book of Frags.  Here are some of my thoughts on it.
The Frags in The First Book of Frags by Dave Lordan are really amazing reads, very original, more than a bit demented, and they will for sure make you laugh and at times gasp in a mixture of shock and delight.  There are things to offend almost everyone in these Frags.  There is really a tremendous lot in these works to like and enjoy and they will certainly make you think.  I will concede the ultra prudish might be offended and I think they are supposed to be by how women are treated.   This a deeply creative book.  The frags at times do not have so much of a consciously created feel but seem as if they were dictations from the consciousness of a wired for destruction Ireland.  The frags do exhibit the themes I have talked of this month.  Namely those of the weak or absent Irish father, the escape in drink and now cocaine, the way in which the Irish hide behind the persona of the stage Irish, and the way in which Irish literature feeds upon itself, which is part of why it is so rich.
My post on The First Book of Frags is here

A few weeks after the artist’s so-called stroke a collector came to the rehabilitation unit to parley.

I have been collecting you for thirty-two years, the collector said, since the very beginning.

The collector opened a briefcase and took out his several items, laying them out carefully on the coffee table for the purposes of display. He was aiming to jog the artist’s memory of who he was before the stroke and return him to self-consciousness and the living world.

The artist had not yet recovered his tongue. His hands were paralyzed. The medics assumed he had completely forgotten who he was.

The collector read from index cards to explain each item as he was going along:

The artist wanted to tell him that he had never been a bohemian, that that was a middle-class, city-dwellers thing. He was always a punk of the outskirts. The songs he liked - especially when he was pissed - were angry, not maudlin,. He didn’t smoke his drugs buzz either. He snorted it, like a good little punk.

Identifying Item B: Shard from a pint-bottle of Harp Lager. Circa 1981. Reputed to be from the bottle which held subject’s first ever alcoholic drink. Of importance because of later descent into stage three alcoholism, the experience of which forms basis for first successful works. Purchased from subject’s mother in The Bernard Shaw.

It was in fact the artist’s aunty, a premium dipso, posing as his mother to get herself stood free drinks in a bar where she had sniffed out a gullible artsy crowd. At the time She had been reported missing in her adopted home-sty of Dudley, where she had not been seen for a week. But the artist couldn’t tell the collector this.

Identifying Item C: Photograph of badly-built Snowman. In an interview subject described this photograph as his ‘aesthetic manifesto’. Subject said that the true subject of the photograph was ‘my first serious girlfriend with whom I was very much in love at the time. She is in the photograph, but she is invisible within it. She is hidden behind the snowman, her near-perfect beauty concealed and disfigured by the snowbeing’s shoddy and disintegrating facade. In my work I foreground ugliness in order to shelter beauty. The conditions are not right in our time for the revelation of beauty. We must wait, so that when we do uncover beauty, it will not be immediately  appropriated and therefore inverted and destroyed. To throw the beauty-hunters off, beauty must be concealed behind a show of rottenness. Those artists who reveal beauty in our era are offering it up for sacrifice. In Byzantium, where I live, such artists are considered traitors and will be tried as such when the time comes’. Photograph taken in Cummer Graveyard January 1987. Donation to the collection from Author.

Even if he could have told the collector, the artist would not have told him that every fancy aesthetic statement he ever made was just ad copy for himself. He was aping those who gave good interview, as it seemed such an integral part of success.  In the art-world you can talk like you are out of your tree all time and get admired for it instead of avoided or locked up. The artist was as loquaciously insincere on art as he was on anything else.  He could believe in nothing, yet, with his eloquence, could express almost everything.

Identifying Item D. Medical Report from Mater Private Hospital 2011. Clean bill of health save two minor items. Hypertension, for which 5mg Ramillo has been prescribed and is being near-effective. And a slightly overactive thyroid gland, leading to occasional diarrhea, agitation, anxiety and low-level weight loss. Thyroid to be monitored every six months. Doctor’s signature indecipherable. Stolen by a hospital porter, an obsessive fan of the subject. Later retrieved by Gardai. Then misplaced by Gardai. Bought by private treaty from nightclub bouncer on Leeson Street.

It’s fake, the artist silently shouts at the collector. The police are country’s most sophisticated thieves and counterfeiters. How can he not know that? Every painting in the national gallery was painted by a cop. The real ones are stored in Barbados, and  sold off at secret billionaire auctions in Trinidad.

But at this stage the nurse intervened by announcing it was time for rest and meds and for the collector to leave. As she opened the room door to usher him out the artist saw that there was a queue of collectors as long as an x-factor audition in Blanchardstown waiting to offer up  excreta of the artist’s existence, in the hope of being the one who could claim to have found the key piece that put him back together again. Imagine what that piece would be worth at auction?

The artist wondered how long he would have to wait for the collector with whom the arrangement had been made to arrive in. To this collector he would suddenly and rapturously speak his memory, his hyper-inflating sentences of miracle recovery.

He was proud, and felt a kind of haughty pity for the collector he had just seen, and pity for all the other ignoramuses in the hall. Surely some among them would eventually realise that it was the artist who had been collecting them all along.

This story is protected under international copyright and cannot be published in any format without the approval of the author.

Dave Lordan is a writer, editor and creative writing workshop leader based in Dublin who has been shaking up the irish writing scene with his passionate, risk-taking writing since the early noughties. He is the first writer to win Ireland’s three national prizes for young poets, the Patrick Kavanagh Award in 2005, the Rupert and Eithne Strong Award in 2008 and the Ireland Chair of Poetry Bursary Award in 2011 for his collections The Boy in The Ring and Invitation to a Sacrifice, both published by Salmon. In 2010 Mary McEvoy starred in his debut play Jo Bangles at the Mill Theatre, directed by Caroline Fitzgerald. Wurm Press published his acclaimed short fiction debut First Book of Frags in 2013. Also in 2013, in association with RTÉ Arena and New Island Books, he designed and led Ireland’s first ever on-air creative writing course. He also edited the anthology New Planet Cabaret in association with RTÉ Arena and New Island books, as well as Issue 22 of The Stinging Fly, Ireland’s leading literary magazine, for which he is a contributing editor.  He is also co-prose editor of the transgenre experimental arts website colony.ie He recently designed and led the Heart in Mouth community writing festival in association with Fingal Libraries, and the Wraparound perfomance poetry and creative literacy programme in Irish secondary schools in association with Poetry Ireland and the JCSP school libraries programme. He teaches contemporary poetry and critical theory on the MA in poetry studies in the Mater Dei Institute as well as providing teacher training courses in Teaching Creativity there and elsewhere. He teaches a workshop in experimental fiction for the Irish Writers Centre and creative writing for Co Wicklow VEC and the Big Smoke Writing Factory in Dublin. Alongside creative collaborator Karl Parkinson, he makes up the popular performance poetry duo Droppin The Act and he is a renownedly passionate performer of his own work which he continues to read at festivals and venues in Ireland, England, Italy and Canada. Follow him @vadenadrol andwww.davelordanwriter.com

My Q and A with Dave Lordan
http://rereadinglives.blogspot.com/2013/03/dave-lordan-question-and-answer-session.html
My great thanks to Dave Lordan for his contribution to ISSM4.