"As Long as it Takes" by Maria C. McCarthy (2014, lead story in collection of same name) 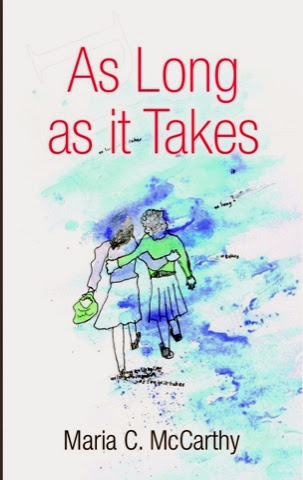 I first became aware of the work of Mary C. McCarthy when I read an excellent interview with her by Shauna Gilligan, PhD, (author of a wonderful book, Happiness Comes from Nowhere - there is a link to this at the end of the post).  They talked about the focus of McCarthy's debut collection of short stories, As Long as it Takes.   I learned the stories in the collection focus on first and second  generation Irish women  living in England..  I felt the collection would be perfect for Irish Short Story Month.  So far I have read only the very poignant title story.  (I will soon post on the book as a whole.)
The central character left her home in Ireland to move to London some time ago.  She has been married for some years, to an Englishman.  McCarthy is very thrifty and subtle with the picture she lets us develop of the marital dynamics.  It doesn't seem to be a bad marriage, just settled into routine.  Her mother back in Ireland wants grandchildren, she wants children and so does her husband.  I don't want to tell too much of this very powerful story.   She has had several miscarriages, the last at seven months.  McCarthy lets us experience the terrible emotional impact of this and its sheering physicality.  She feels like a failure as a wife, a daughter, and a woman.  She gets a package, near the start of the story, of a Christening Suit, a gift, or an obligation and mark of her failure, from her mother for the child she has failed to deliver three times.  She is on her way back to Ireland.  Her mother is dying.  Her husband asks her how long she will be gone, she tells him as long as it takes her to die.
She takes the ferry back to Ireland, in second class.  The passengers all seem to be Irish women with numerous children but no man with them.
The interaction between mother and daughter is very interesting.  If you look, I think you can see deep levels of guilt the mother has planted in her daughter.  An amazing thing happens on the boat back from Ireland.  It will take me a while to attempt to fathom the full meaning of the close.
Shauna Gilligan's very interesting interview with Maria C. McCarthy
http://shaunaswriting.com/wordpress/
About the Author  (from her web page)
http://www.medwaymaria.co.uk/

Maria’s first poetry collection, strange fruits is published by Cultured Llama in association with WordAid with all profits going to Macmillan Cancer Support.

Her first collection of short stories As Long as it Takes, about first and second-generation Irish women living in England, is forthcoming in February 2014.

Writing as Maria Bradley, she was a regular columnist on BBC Radio 4′s Home Truths.

Maria has arranged themed events at libraries in the Medway towns, Canterbury and Swale, and at The Avenue Theatre, Sittingbourne, featuring her own work and that of other local writers and musicians. She has also taken part in events at the University of Kent, at the Medway Fringe Festival 2006, and at Foyles Bookshop in London.

She leads creative writing workshops in her writing room – a converted shed at the end of her garden – and has also taught workshops on short fiction at the Hazlitt Arts Centre, Maidstone, for Save As Writers, Canterbury, and has led poetry workshops for libraries in the Medway and Swale areas of Kent.

Maria has an MA with Distinction in Creative Writing from the University of Kent. She was winner of the Save As Prose Awards 2011, having also won the 2009 Award, and gained second place in Canterbury Festival Poet of the Year 2010.

As Long as it Takes (due for publication February 2014)
Unexplored Territory (published November 2012)
strange fruits (published July 2011)
Maria has kindly consented to do a Q and A for Irish Short Story Month so please look for that soon.