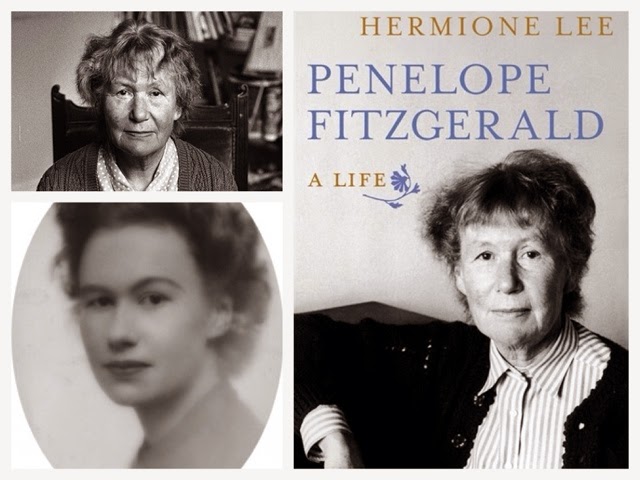 Penelope Fitzgerald A Life by Hermione is the second best literary biography I have read in many years, the best being Katherine Mansfield The Story Teller by Kathleen Jones.  I have read and posted on two of Fitzgerald's novels, The Blue Flower and The Book Store as well as one of her wonderful short stories.
Lee's book is not just a very detailed, lovingly rendered account of the very long life of Fitzgerald (1916 to 2000, UK) who is now considered one of the finest of the last centuries writers.  She came from a very cultured literary, though hardly rich family.  Her uncles, the Knox brothers on whom she wrote a joint biography were very involved with Punch for many years.  It is fair to say her family nearly epitomized English brilliant shabby genteel literary eccentrics.  Fitzgerald did not begin her writing career until she turned sixty.  She is certainly an inspiration to all those sixty plus who want to try writing but wonder if they still can.
I don't want to give a capsule version of Fitzgerald's life (you can just google her for that).  I will just talk about a few of the things I relished about this book.  A lot of the book is taken up with decades in which Fitzgerald struggled to raise her children under near poverty.  Her husband Desmond, who she often called, "The Irish Soldier" suffered horrible trauma in World War II, mostly from his having killed hundreds of people (he used to wake up screaming for years).  He worked as a travel agent when he lost his license to practice law due to fraud.  He worked as a travel agent and became a terrible alcoholic.  Their marriage was a far from happy one but it endured.  He died at fifty six.  The grinding poverty took a toll on Fitzgerald.  Even when she began to become secure financially she still was reticent to spend.
I really enjoyed the accounts of her relationships with her publishers, her work as an award judge, and a reviewer.  She was a very dedicated grandmother and mother. ,it was fascinating to see the kind of books she liked.
I really felt I knew a good bit about Fitzgerald after reading this book.  It will help a lot if you have read at least her major books before you read this.
This is a first rate literary biography and I am very glad to have read it.  I was given a free copy by the publisher.
Mel u

Mel, I'm honoured! I have great respect for Hermione Lee.
Thank you.