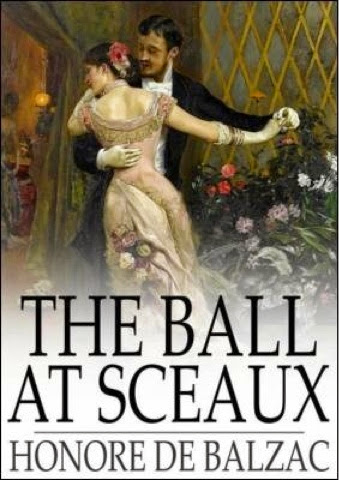 The Ball at Sceaux, the fifth work in The Comedie Humaine, was inspired by a fable of La Fontaine. I tremendously enjoyed this brief novella.  The central character is Emile de Fontaine, the youngest and very spoiled daughter of a wealthy family.  Having three daughters that would, were we in France (or the Philippines for sure) in 1830 be of prime marriage age I could directly rate to the father's efforts to make sure his two sons and three daughters are properly married.  The portrait of the spoiled daughter is totally perfect, a miniature gem of the vast Balzacian universe.  Balzac goes into scrumptious detail laying out the behaviour of the daughter and her appearance.   He got the character of the spoiled baby daughter of the family exactly right.  You could feel her tyrany over the family.  She is very close to her  elderly uncle, a former admiral and a noble man, whom she bullies about knowing he can deny her nothing. He is a great minor character, still full of life. She has strict demands for a future husband, no one in the family circle of acquaintances is handsome enough, rich enough or has the potential to be a peer of France, one of her requirements.  You can sense the frustration of all and you feel she is enjoying her power.

As I mentioned before, one of the very frequent characters types in the early 19th century novel is the handsome young commoner who latter is revealed to secretly be very rich aristocrat from a family of ancient nobility.  A mysterious young man very secretive about his family and past enters the scene.  Emile quickly becomes infatuated with him.  He enters the family circle through the efforts of the uncle who sees him as a good match based on his bearing.  The uncle is a great comic secondary character.  Balzac describes vividly all his characters and I liked the uncle a lot.

One day she sees the man working in a shop and loves turns to contempt.  She has no interest in a common shop keeper.  No real spoiler here but the mysterious msn turns out to be fabulously wealthy and from one of the finest families in France, but by the time this is revealed Emile had already married her uncle.

The very real greatness of the story is in the portrait of the spoiled daughter, a domestic terrorist and family tyrant of the first order and the family dynamics.  Balzac gives his normal wonderful descriptions of furniture and clothing. The ending is interesting even if straight out of the standard plots of the period.

The Ball at Sceaux is a very good work.  It could be enjoyed by all, not just those reading the full Human Comedy.