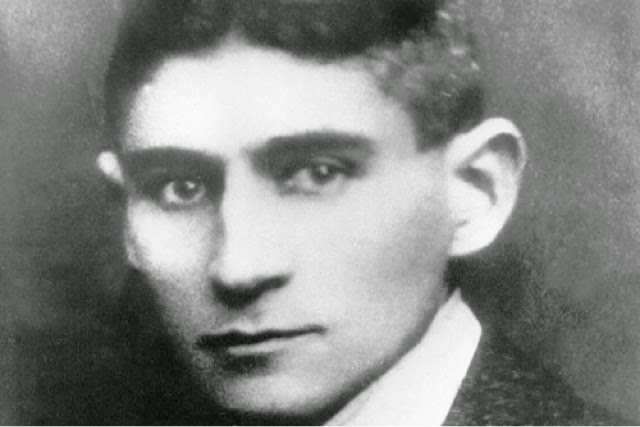 Request for interpretation of one episode in The Trial - In one chapter K is going to visit the official court painter.  As he goes up the steps of the building where the painter lives, he is accosted by a band of girls 13 or so years old.  K describes them as "already degenerate" and they seem to want to have sex with him.  They are aggressive, the most so has a hunchback.  How do symbolic readings of Kafka see this?
German Literature Month November 2014 Year IV

The schedule and guidelines for participation are on the event webpage.  Just reading the  posts of all the other participants is tremendously informative. There is an interesting contest or two and some prizes to be won.  One of the tasks participants are charged with is reading a work first published in 2014 and this collection qualifies.
I am very happy to be once again participating in German Literature Month, hosted by Caroline of Beauty is a Sleeping Cat and Lizzy of Lizzy's Literary Life.   Events like this are one of the great things about being part of the international book blog community.  I know there is a lot of work that goes into a month long event and I offer my thanks to Lizzy and Caroline
Works I have so far read for German Literature Month 2014
1.   Siddhartha by Hermann Hesse
2.   Gertrude by Hermann Hesse
3.  "Diary of a School Boy" by Robert Walser (no post)
4.  Steppenwolf by Herman Hesse
5.  Burning Secret by Stefan Zweig
6.  Life Goes On by Hans Keilson
7.  Comedy in a Minor Key by Hans Keilson
8.  "The Wall" by Jurek Becker
9.  "Romeo" by Jurek Becker
10.   "The Invisible City" by Jurek Becker.
Is
11.  Wittgenstein's Nephew by Thomas Bernhard
12. "Dostoevsky's Idiot" by Robert Walser
13.  "French Newspapers" by Robert Wasler
14.  Jakob the Lier by Jurek Becker
15.  The Trial by Franz Kafka
The Trial by Franz Kafka (1883 to 1924) is uncontroversiallly one of the most influential literary works of the 20th century.  No German language writer after him has had anywhere near the influence of Kafka.  Since I began blogging I have read his most famous short fiction, I think my favorite is "The Penal Colony", but this is my first reading of one of his two novels.  Both were incomplete but the story line in The Trial is brought to a conclusion.
As I read on in The Trial I was on high alert, trying to understand what I knew was a key, almost holy literry text, looking peer into the depths of the work.  At every turn I asked myself what does that mean?  I knew parts of the symbological heritage comes from medieval Jewish tradition and Eastern European literature but it is a very original book. Of course it is read and mentioned in classes throughout the world (by pedagogical professionals who most likely have not read it) as a commentary on the absurdities of modern life.  Anyone trying to deal with a government office in The Philippines will directly relate to the endless labyrinth of lines and procedures combined with a hidden from view power structure that can solve all your problems in an instant if only you know or bribe the right people.
The Trial was funnier than I thought it would be, it has strong comic elements.  There are strange at times sexual elements in the plot.   K, for example, has a long standing date with a hooker every week.  And then once again, what are those young teenage girls doing in the hallway?  Why is the man in the closet who is going to whip the first two policemen who arrested K dressed like a stereotype figure in a gay bar costume party?  There is almost a lesbian scene, maybe.  Plus I liked a lot the office politics in the sections set at the big Prague bank where K has an important job.  The court room scenes are beyond brilliance.
With Ulysses, Proust and "The Waste Land", The Trial is a central text.  It is also a lot of fun to read. Don't be nervous about or scared to read this book.
I hope to reread this in 2015 as well as read initially The Castle.  There is also an edition of The Complete Short Stories of Franz Kafka that has been on my Amazon wish list for a longtime.

I always see Kafka's name. Didn't know anything about him until reading your blog post.

The Trial is funny; I'm sure it was meant to be a comedy. Kafka read excerpts of it to his writer friends, playing it for laughs.

I'm coming to think of the whole thing as a metaphor for life, and the difficulty of avoiding guilt. Kafka was a lawyer, and on aspect of law in the Austro-Hungarian Empire was the character of the accused, not just the particular crime he's alleged to have committed. So guilt could be an aspect of self rather than a state vis-a-vis the law, if you see what I mean. We are all guilty, of one thing or another, and we will either be punished for that or not by the trial which is life. The metaphor of the courts and the proceedings are brilliant, I agree.

As I remember the book, Josef K sees every woman he encounters through a lens of hypersexuality, and all of this sexual current is presented by Kafka as something low and almost animal, always lust and never love, so the girls just entering adolescence would be little animals, depraved, and I think the hunchback is just to heighten the sense of depravity and inhuman-ness K associates with sexuality. So there's one way of looking at it. There's no consensus as far as I know about what the book "means."

I've read The Trial, so I guess I have read some German literature. Very interesting post (and comments) today!

The Trial was the first proper adult book that I read so I have fond memories of it. I must have read it about three times but I haven't read it for quite a while so maybe it's time for a re-read. Potential readers should not be put off by it; it's dark but thoroughly enjoyable.

Topazshell - thanks for your commet. I suggest you start Kafka with the short story "The Penal Colony"

Scott G. F. Bailey - very interesting to learn Kafka write it to be at least partially a comedy. Thanks for the help on the meaning of the young girls.

Suko. Glad you have read The Trial.

Jonathan - have you also read The Castle?

Hi Mel. I have read The Castle and Amerika and several short stories but all quite a while ago. I picked up a copy of The Castle from the library about a year ago with the intention of re-reading it but for some reason wasn't in the mood for it. I think I may read it soon though.

I first read The Trial when I was in my teens and again ten years later. I ought to revisit it one day, and your review is a good reminder.