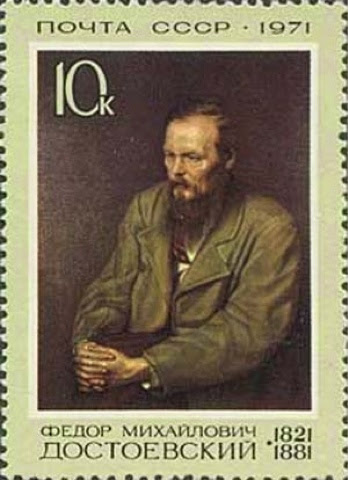 Long ago I read the major novels of Fyodor Dostoevsky. All in the translations of Constance Garnett.  I was recently kindly given an advance review copy of the forthcoming next year translation of Notes from a Dead House, done by the award winning team of Richard Pevear and Larissa Volokhonsky.
Richard Pevear in his concise and interesting introduction tells us Tolstoy considered Notes from a Dead House Dostoevsky's best work.  It was first partially serialized and was a great success when published in full in 1862.  Dostoevsky spent four years in a Siberian prison colony for his involvement with a banned politcal group. Notes from a Dead House is based loosely on the years Dostoevsky spent in Siberia but it is a work of fiction, not a pure memoir.
The narrator of the novel received a sentence of ten years in a Siberian prison colony for the murder of his wife.  In a funny note, Pevear tells us people often were in later years to ask Dostoevsky why he murdered his wife!
The book is strutured as an account of the narrator, a nobleman, getting used to life in prison,learning the routines and getting to know the many different types of inmates and guards.  Some of the guards were decent acting and a few were sadists.  Most everyone had a scam to make money for Vodka or better food.  Every chapter is about a different aspect of prison life or focues on a particular inmate. The detail is fascinsting.  The psychological penetration of Dostoevsky has very few equals.
I am very glad I read this book and I am sure it will be very welcomed by all Anglophone readers of Russian literture.
Mel u

I also read all of Dostoyevsky's works in the Garnett translations. I've also read some of the later translations, at least one by the duo you mention.

The title was House of the Dead when I read it, and I fear it will always have that name for me.

I always considered HoD to be more journalistic in nature than a novel, even though it's listed as a novel. It feels more realistic and factual than his other works. I like to read it back-to-back with Solzhenitzen's A Day in the Life of Ivan Denisovich. If forced to choose, I would prefer life under the Czars to life under the commissars.

I'm not a fan of P&V's translations. I find their writing flat and workmanlike, although they're said to be more literal than most other tranlations. I like a bit of sparkle in my prose! The Jessie Coulson version of 'Memoirs From the House of the Dead' is very good. I don't know why publishers keep bringing out new translations of Russian novels. Releasing two new editions of Anna Karenina this year seems a bit excessive? I wonder how much they actually differ?

Fred. I agree House of the Dead does read like journalism. I have never read Solzhenitzen's, other than Gorky I have read little post Czarist fiction.

Violet. I have read the P and V translations of War and Peace, AK and a few short stories and the Garett translations. Maybe publishers are not aware in advance of multiple volumes of same translation in a short period

I also have read little post-Czarist
fiction aside from Solzhenitsyn or Sholokov's "Don" quartet. Soviet realism never turned me on.