Vendetta by Honoré Balzac (1830 - A Novella. - A Component of The Human Comedy) 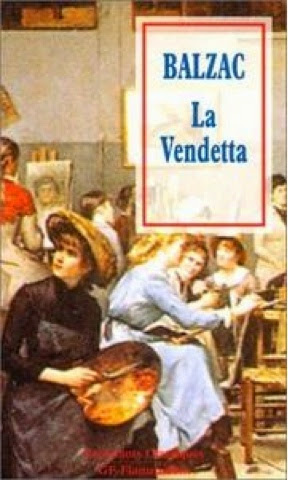 The Vendetta begins with a meeting in Paris between Napolean and a fellow Corsican whose entire family was killed by another Corsican in a feud.  The killing was done by setting fire to the families house, with the children tied to their beds after the adults were shot or stabbed.  Napolean tells him he knows of the malignant power of feuds on Corsicsa. He cannot intervene but he offers to arrange the sale of the man's estate in Corsicsa for enough to give him a start in Paris.   The next chapter jumps ahead fifteen years.  The man is doing well, has remarried and has a daughter he totally dotes on.   In the Balzac I have so far read, each one has at least one scene that is totally wonderful.  In The Vendetta it is an art class  for the adolescent daughters of the rich of Paris.  The girls form subgroups based on their father's status and wealth. Daughters of aristocrats look down on the girls from wealthy business families and so on. This was just perfect.   The girls are all well described and the art classes are perfect. They are catty and snide and look to hurt the feelings of those not "cool".  The instructor gives the classes to live but fancies himself a real artist.
The Corsican's daughter,maybe fifteen, tells him she has fallen madly in love.  The father is outraged and forbids her to see the man anymore.  He feels he should be the only man in her life.,Of course she refuses and they marry.  The father discovers the boy is part of the family that long ago wiped out his family.  He wants badly to kill him but he restrains himself.  The boy is a struggling artist and he refuses to help the couple even when they starve in the freezing slums of Paris.  Compressing a good bit, the girl gives birth and her father finally relents after months and goes to visit her.  Not wanting to tell the actually quite good ending, the father gets his revenge but  at a tragic cost.  The cynical might groan at the ending but I liked it.
The Vendetta is not on any lists I have seen of the best of Balzac.  It can be read in under ninety minutes and it is not bad.
26/91
I have now begun reading Ford Madox Ford's favorite Balzac novel.
Mel u