Life Goes On by Hans Keilson (1933, translated into English by Damion Searls in 2012)

"For busy, harried or distractible readers who have the time and energy only to skim the opening paragraph of a review, I’ll say this as quickly and clearly as possible: “The Death of the Adversary” and “Comedy in a Minor Key” are masterpieces, and Hans Keilson is a genius."  Francine Prose in The New York Times Book Review
To this we must add Han Keilson's first novel, wriiten in 1934, Life Goes On, which was not translated when Francine Prose wrote about Keilson. 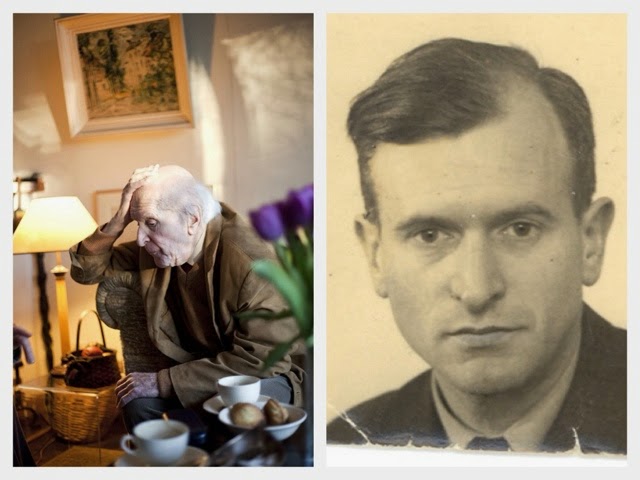 "Prussia, the ruler of Germany was always an enemy of the intellect, of Jews, Christianity and the humanism of Europe.  Hitler's Third Reich is alarming because it sets itself to put into action what was always a Prussian project, to burn the books, to murder the Jews and revise Christianity".   From "The Auto-da-Fe of the Mind" by Joseph Roth, 1933 - written in French while Roth lived in Paris

German Literature Month November 2014 Year IV
Works I have so far read for German Literature Month 2014
1.   Siddhartha by Hermann Hesse
2.   Gertrude by Hermann Hesse
3.  "Diary of a School Boy" by Robert Walser (no post)
4.  Steppenwolf by Herman Hesse
5.  Burning Secret by Stefan Zweig
6.  Life Goes On by Hans Keilson
The schedule and guidelines for participation are on the event webpage.  Just reading the  posts of all the other participants is tremendously informative.
I am very happy to be once again participating in German Literature Month, hosted by is Caroline of Beauty is a Sleeping Cat and Lizzy of Lizzy's Literary Life.   Events like this are one of the great things about being part of the international book blog community.  I know there is a lot of work that goes into a month long event and I offer my thanks to Lizzy and Caroline
During German Literature Month in November 2013 I read and posted on The Death of an Adversary  by Hans Keilson (1909 to 2011 -yes, 101 years).  It was the read along book for the month.  Not everyone liked it, some expressed the opinion that the narrator, a Jewish boy in the early days of Nazi Germany was a coward for always caling Hitler "The Adversary", never mentioning him or Nazism by name.  Based on the life experience of family members who lived under the rule of a relatively benign dictator Ferdinand Marcos I thought this totally wrong.  Marcos was not a mass muderer, not an ideologue, he was more into building personal wealth, but those who criticized him often disappeared.  My wife lived under all the Marcos years, from young girl to college freshman.  She and her siblings were trained never to speak of Marcos to anyone.  This background helps me relate to the novels of Keilson. 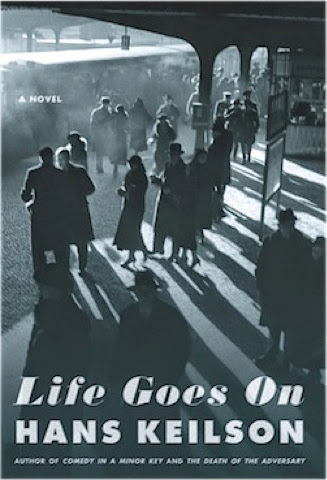 Life Goes On centers on a long time married couple and their children.  The novel, set in Germany, starts about 1919 and ends around 1933.  There are not dates given in the novel but it is not hard to set in place based on events in the novel.  The focus is on the slowing crushing and ultimately devasting impact of post WW One inflation and the collapse of the German economy on the family and those in their circles.
The father served four years in the war and returned uninjured. He was awarded an Iron Cross for valor but he never wore it.  His wife kept it in a drawer.   He worked as a peddler for a few years until he saved up enough to start a general store in the small town in which he grew up.  He married a decent hard working woman and they had three children.  They lived above the shop.  When times were tough they just said "well we lost the war" what can you expect.  The same customers have been coming in for years just as they have been buying the merchandise they sell from the same suppliers for a long time.  They are constantly struggling to survive as their customers can buy less on less.  Increaingly they have to sell on credit or they will lose trade to bigger merchants.  Likewise they buy what they sell largely on credit.  There is a lot to be learned about German society and the economy in this wonderful book. Their daughter lives and works in Berlin and when we first meet him their son Fritz is getting ready for college.  We see his existential struggles to find value in studying in a society with few jobs.  Slowly, kept masterfully in the background, we see social unrest developing, organized mobs, police goon squads and even and old friend of the father becomes a full time politcal agitator.  From his rhetoric he might be a Commuist but could just as well have been a Nazi.   The couple  wants no part of politics and urges their son to stay apolitical.
Soon the couple has trouble paying their own bills and they have to borrow from Peter to pay Paul.  This is humiliating for the couple who always prided themselves on their reputation.  The downward spiral of the couple's finances was very painful to witness.  You can feel the impact of all this on their marriage.
Time goes on and soon almost no one can buy anything and customers cannot pay for what they have bought on credit.  In a completely chilling heart breaking series of scenes we see the wife going to the homes of their customers to try to collect a bit of money.  Once affluent people where their coats until they turn to rags.  Everyday things get worse.  Keilson in his genius makes us feel the oppression in our bones.  Things keep greeting worse and worse until the incredible close, which was really inevitable, but I am pretty sure no one, I certainly did not, will see it coming.
There are numerous brilliant minor characters and perfect small scenes.   It is also an excellant portrait of a marriage surviving and changing through terrible times.  There is much I have left out.  I strongly urge the reading of Keilson's three novels, only about 650 pages.
At the close of the novel there is a fascinsting afterword by the author added decades later, in which he explains how his publisher told him he needed to change the ending of the novel to avoid offending the Nazjs by appearing to suggest the father had turned to the Communist Party.  In a terrible to read sentence he closes the afterward by telling us both of his parents died in Auschwitz.  His father, the novel draws on autobiographical elements, earned an Iron Cross during WW One and thought it would save them.
Keilson was 23 when the novel was published.  The Nazis burned it and many of the book's first readers.
The life of Hans Keilson is very inspirational.  The New York Times published a very informative obituary.
I have begun his Comedy in a Minor Key, set in the Netherlands when it was occupied by the Nazis.
Mel u

Fascinating post. This is the second 'anti-nazi' German author who lived and published during the period that I've been made aware of this year. I think this is a growing trend or mini-trend.

Mr. Keilson sounds like someone I should look for.

I hadn't heard of the author before reading your post. Thanks. I notice it was originally published in 1933.

Bulbynorman. - I very much endorse this author.

I remember that in the 1980s, S. Fischer, one of the most prestigeous publishers in Germany re-published a series of books that were burnt and banned by the Nazis as a paperback. I bought books by authors like Keilson, Hermann Grab, H.W. Katz, Wilhelm Speyer, Adrienne Thomas or Alexander Moritz Frey about which I had never heard before. This re-publication, together with the books of Jurgen Serke started a process of rediscovering all these great authors and books in Germany. Several of the authors, like Hans Sahl or Keilson were still alive to witness this late act of appreciation and respect. I am glad Keilson is now available in English. Thanks for your excellent reviews!