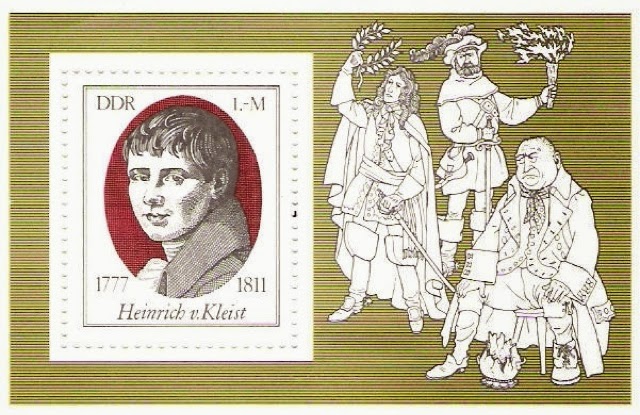 During German Literature Month in November 2012 I posted on an excellant story with occult overtones, "The Begger Woman of Locarno" by Heinrich von Kleist (1777 to 1811, born Franfurt, Germany).  Kleist was primarily a dramatist.  At times he has been considered nearly on a par with Schiller and Goethe.

"Saint Celilia or the Power of Music" begin on Corpus Christi day, in Aachen, Germany. Four Protestant brothers decide it would be great fun to totally trash the cloister housing the nuns and they assemble about 100 other like minded young men who begin throwing rocks trough stained class windows and such.  The nuns urge the abbess to cancel services but she will not.  In another bad omen, the nun who is a master organ player takes sick.

The service starts and just as the mob is ready to destroy the church, the nun takes her place at the organ and plays with more power than ever before.  The rioters are quelled by the majestic music.

Years later, when the four brothers are never heard from by their family, their mother comes to Aachan looking for them. The chief magistrate recalls four brothers locked up, considered totally insane. To her horror,  the mother finds them in the town mental asylum.  They are sitting at a table, wearing long black robes, in front of a crucifix.  She is horrified.  She finds the brothers have been like this for six years, they never speak but at midnight when they sing Gloria in Excelsis, from the Catholic Mass.

I read this story in a really excellent anthology, Tales of the German Imagination edited, translated and introduced by Peter Wortsman.

This sounds great and spooky! Would love to read it. You seemed to have read a lot of good German/Austrian literature this month. How do you have time?

I will note some of the authors and maybe next time participate in this month.
Lisbeth @ The Content Reader

Lisbeth Ekelof. It is a very exiting fun to read story. I have a lot of reading time. I have luxury of reading almost all waking hours if I wish. Not to late for you to do a post for German Lit. Month!