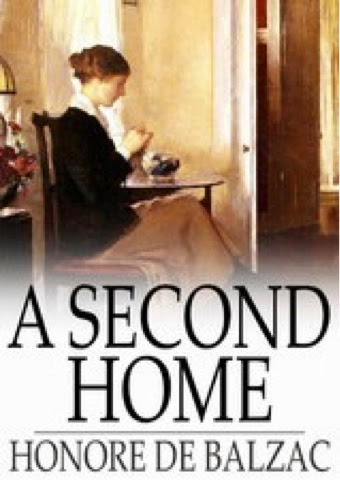 My Posts on Balzac
A Second Home, a short novella, is a very melodramatic work that contrasts two Parisian families, one rich and loveless and one poor and full of warmth and kindness.  The common factor in the two families is Comte de Granville.  The Comte, from a very wealthy aristocratic family was pushed into a marriage arranged for dynastic purposes far before he was ready.   When we meet him he is maybe forty and there is no love and no passion (Balzac makes it obvious there is no sex) left in his marriage.  On the way home from his office he often prefers to walk and his path takes him through one of the poorest parts of Paris.  He often sees an elderly woman and her beautiful daughter.  They are clearly destitute living from their meager income as embroiderers.  One day the Comte hears the mother say they will soon be evicted.  The Comte throws his money filled purse through the window.  Compressing a lot he soon comes to find in the girl the warmth his life lacks.  He would rather eat a pauper's dinner with Caroline and her mother, who was once an aristocrat, than dine in his mansion on elegant cuisine. I am not sure why Balzac felt he needed to make the mother a fallen aristocrat.  Fifteen years pass and Caroline is living in a luxurious apartment with her and the Comte's two children.
Balzac does his usual great job describing the eniviorment.  The poor parts of Paris came very a life.  In a very exciting scene the wife has tracked him to his second home and things go very badly for the Comte and Caroline when wife arrives in his second home.
A Second Home is early Balzac.  The very strong elements are in the descriptions of people and the slums.  The weakness is in the romance.  The bad marriage is totally perfect.  I liked A Second Home a lot.
I am now reading Vendetta, about Corsican family fights.  Napolean is in the first chapter!