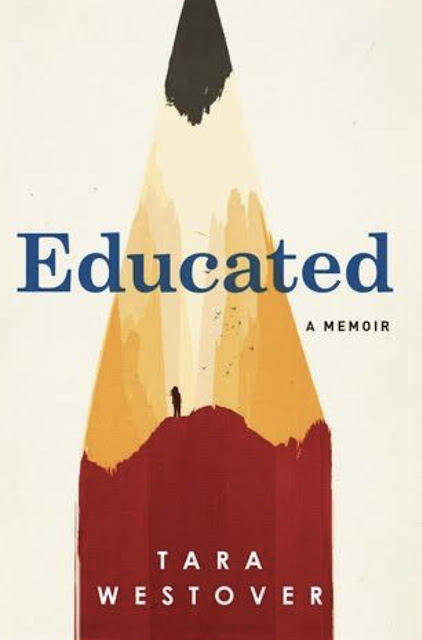 Tara Westover was born into a family of survivalists in Idaho who believe a civilization destroying apocalypse is imminent. They see anything connected to government as part of a conspiracy to enslave the population.  They do not trust doctors.  Tara did not set foot in a public school until she was 17.

Her father totally dominated the family.  He was a self appointed preacher.  Their isolation meant there was no one to protect her from the violence of one of her brothers. When another of her brothers gets into college, there were seven children, Tara begins to work to get herself into Brigham Young University.  (Her family were Mormons.)

From here we follow Tara’s incredible journey onto Cambridge University where her brilliance wins her a scholarship and eventually a PhD in history.  Tara shows us her difficulties fitting into college society.The family becomes quite wealthy through the mother’s sale of herbal medicine.

There are numerous terrible accidents from working in the father’s businesses and driving in the snow.  The father sees any interaction with non-survivalists as contacts with what he calls the “Illuminati”.

It must have taken a lot of courage to tell this story.

“Tara Westover is an American author. Raised in Idaho by a father who opposed public education, she never attended school. She spent her days working in her family’s junkyard or stewing herbs for her mother, a self-taught herbalist and midwife. She was seventeen the first time she set foot in a classroom. After that, she pursued learning for a decade, graduating magna cum laude from Brigham Young University and subsequently winning a Gates Cambridge Scholarship. In 2014 she earned a PhD in history from Trinity College, Cambridge. Westover was Fall 2019 A.M. Rosenthal Writer in Residence at the Shorenstein Center at Harvard Kennedy School. She was selected as a Senior Research Fellow at HKS for Spring 2020. Educated is her first book”.

I read this a couple of years ago and liked it very much. Extraordinary childhood. A strong girl nevertheless, that managed as well as she did.