A Train in Winter An Extraordinary Story of Women, Friendship and Resistance in Occupied France by Caroline Moorehead (2014) 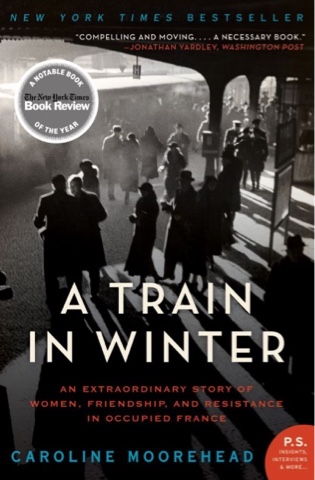 Ever since I learned Iréne Némirovsky, author of Suite Francaise and numerous other wonderful works was put on a train in Paris by the Germans and died in Aucshwitz two month after arriving I cannot see what happened to French Jews during the Nazu occupation of France as just statistics, just data without  personal meaning in a history text or a TV documentary.  That a woman who created such beauty and wisdom just from her mind should die under such barbaric and filthy conditions is something I cannot forgive.  The holocaust was an  attack on anyone who ever lived the reading life.  Sadly anti-Semitism seems on the rise in France.
A Train in Winter by Caroline  Moorehead begins with an account of the progressively worsing development of the Nazi occupation in Paris.  The German troops stationed in France were told to be on their best behavior.  Many French citizens thought Germany was certain to win the war so they accepted things.  Then as the Germans begin to drain France of more and more resources to fuel the their war efforts and to feed Germans, a growing feeling of resentment and hate developed.   The French Police mostly cooperated with the Germans.  The Resitance, as depicted by Moorehead, begins to gain strength when De Gaulle starts broadcasting to Paris from London.   He advocates violent resistance to Germans, Vichy French officials, and most French police.  As this develops tne Germans, with the cooperation of French authorities begin to round up Jews to be sent to concentration camps.  Soon those in the Resitance, many were women as French men were depleted due to war deaths and massive POW captures, began to distribute papers denouncing the Germans.  Germans began to be shot.  The Germans began to shoot fifty at least French prisoners for each German shot.  This did not stop the resistance at all.   The depiction of the great courage and feeling of unity of French women in German custody in Paris was deeply moving.   The resistance broke down very old class lines, a baroness might be in the same cell as a woman who once did her laundry.
Moorehead goes into detail about the participation of many French women.  We see how they were motivated to resist, what they did, how it impacted their lives and we learn how many end up arrested and sent to a concentration camp.
I was very moved in the closing section of the book when Moorehead lists many French women who were captured by the Germans but survived to return to Paris.  Many, perhaps most, had severe lifetime health consequences as a result of their time in German camps.  Moorehead gives a brief biographical sketch of over 200 women, survivors and those who died in German custody.  Many more died than made it home.
A Train in Winter spends a lot of time describing the horrible transportation by trains from Paris to the camps.   It would have been interesting to learn how they reacted upon liberation and how the survivors made their way home.
As to who should read or buy this book, students of the War in France will already know the basic facts
of the period.  What is new in the book, to me at least, is the very well developed personal data on the Brave French Women. I found that made the book compelling reading for me.
I recently read Paris at War 1939 to 1944 by David Drake.  It would an excellent companion read with A Train in Winter.
Mel u

Email ThisBlogThis!Share to TwitterShare to FacebookShare to Pinterest
Labels: France