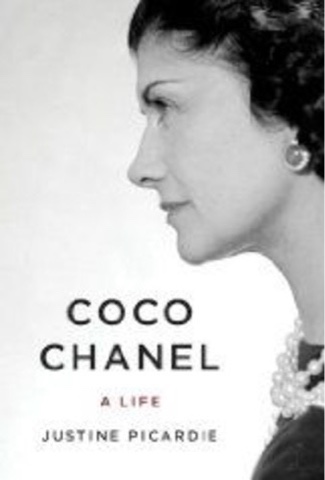 In July of this year I read and was fascinated by Mademoiselle Coco Chanel and the Pulse of History by Rhonda Garelick.  For sure Coco Chanel (1883 to 1971)  is one of if not the most influential fashion designers of the 20th century. Worldwide her influence on fashion is tremendous.  When I started reading Garelick's superb biography I knew very little about Coco Chanel.    Upon reaching the end I felt I had been taken deeply into the psyche and life of an incredibly creative woman, a business genius who created from nothing a fashion and perfume empire worth billions of dollars, a woman who began life as an orphan and ended it atop the fashion universe.  I also saw a complex, deeply troubled and very much a flawed woman.  I admired her to a degree but found her often very selfish, insecure and I find her anti-Semiticism despicable.  I am convinced by the information in this book that Chanel did not just collaborate with the Nazis but tried to use the antiJewish laws they put in place to cheat the Jewish family that bought ninety percent of the rights to her famous perfume, Chanel # 5 from her.
After finishing Gatelick's biography I did not really have any plans to read another biography of Coco Chanel.  I was, however, offered a copy of Coco Chanel A Lifs by Justine Picarde for the one day only price of $1.95 so I bought it.  Picarde's book begins with a glowing description of the beautiful highly refined full of very expensive pieces found at The House de Chanel at 31 Rue Cabon in Paris.  In including in the beautiful objects are a collection of books that Chanel is represented as having read.
"Two walls are lined with leather-bound books: antique editions of Plutarch, Euripides and Homer; the memoirs of Casanova and the essays of Montaigne; The Confessions of St Augustine and The Dialogues of Plato; the complete works of Maupassant and Molière in French, Shelley and Shakespeare in English"
There is one problem with this, Chanel read none of these books, they obviously were purchased just for appearance no doubt by an agent told to get some classic books.  Chanel as detailed by Garelick did not and probably could not have read such works.  The entire book is just a love letter to Coco, ignoring all her glaringly negative characteristics.  No mention is made of her early occasional work as a prostitute or her relentless gold digging, her willingness to sell herself, her fawning over rich men, her petty cruelty at times to employees.   Picarde does not deal clearly with the issue of Coco Chanel and the Nazis, missing entirely how the whole fashion ethos of Coco, including her famous emblem, can be seen as in sympathy with much of Nazi ideology.  There is no denying her romance with a Nazj officer, a baron, thirteen years her junior and her fraternizing with Nazis at The Ritz.  I would personally guess the German Baron was told to romance Chanel to see what use could be made of her.
Picarde's book is close to cloying.  It also provides little information on how Chanel developed her business empire.  She was a genius at marketing, using herself as an icon.
Coco Chanel changed the way women wanted to look.  She was a design genius, there is no denying this.
I cannot, I admit, get past an image of the beautiful impeccably groomed no doubt an admirer of the work of Coco, Iréne Némirovsky being put on a train to Auschwitz with other French Jews and Coco Chanel dancing in the Ritz, liking this idea.
If you are interested in Coco Chanel, then by all means read Garelick's biography.  I cannot accept for those totally fascinated by Coco and wishing to read a largely panegyric book about her, endorse Parelick's book.