"All Roads Lead to Malguidi and Home". A Guest Post by Meera Ekkanath Klein on R. K. Narayan 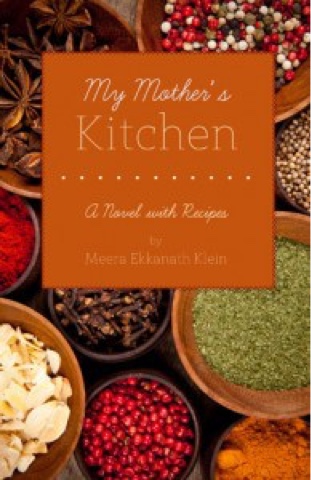 I knew I wanted to read My Mother's Kitchen by Meera Ekkanath Klein as soon as I learned we shared a passion for the great Indian writer  R. K. Narayan.  (I urge everyone to read the guest post she kindly contributed to The Reading Life on him.). Narayan's work is largely set in the South Indian city he created Malguidi.  There is a very strong sense and love of place in the work of Narayan and I find that same love in My Mother's Kitchen.

My Mother's Kitchen, her debut novel, is very family centered.  The heart of the home is the kitchen and the heart of a family is the mother.  The author has done just a wonderful job of creating a sense of the Family at the heart of this novel.

The most stage center characters are the mother and her teenage daughter.  The locale is south India.  After a prelude, the story, narrated by teenage Meena begins in 1955 Mahagiri in South India.  Her  family has about fifty or so milk cows, her father lives away sometimes on a plantation they own.  I loved these lines from Meera, they just felt totally real to me:

"Our cows are my pets. I love everything about them from their graceful, swaying walk to their long tails that look so much like my mother’s hair in a braid. I like their wet noses and gentle eyes, and I particularly like spending time in the cowshed where it is always warm and cozy."

Every chapter is sort of a mini-story.  Some begin with a story from ancient Hindu culture, most chapters end with a recipe for a dish the mother cooked in the chapter.

As the novel goes on you can see Meena grow up, all with daughters will love the relationships in the story line.  We see the daughter mature.  We learn a lot about the culture of the area.  For example we see  the ancient rituals associated with a girl's first mensaturation. We learn how the dairy business works.  In one really exciting scene we are front row center when a pregnant cow needs to have her calf pulled out manually.  I am very interested in gypsies, now called Roma, who originated in India, and was very excited to see what happened when a tribe of gypsies camped on a field owned by the family.  I was interested in seeing how Gypsies were placed in the ancient caste system of India.

I loved it when Meena stood up for herself when her uncle tries to force her into an arranged marriage. We see the conflicts between "modern" and "traditional" India played out very dramatically.

In any family followed over a long period there will be tragedies and heartbreak and this family is no exception.   This is a very heart warming book I greatly enjoyed reading.  This book throughout and the ring of truth with no false notes.

The novel ends with an opened ended exciting development and I will be eager to see what happens next for Meena and her family. When the novel closes she is eighteen.

This is a very well crafted, plotted novel with characters you will love. As a bonus there are the marvelous all vegetarian recipes.  I totally endorse this novel.

You can enter the serene world of Mahagiri in award-winning author Meera Ekkanath Klein’s debut novel, My Mother’s Kitchen: A novel with recipes. Find out more at: http://meeraklein.com/

Award-winning author, Meera Ekkanath Klein, deftly weaves her love of cooking and story-telling into an irresistible tale. My Mother’s Kitchen: A novel with recipes (2014, Homebound Publications) was selected as a Winner in the 2015 International Book Awards in the Multi-Cultural Fiction category. The book was also selected as Finalist in the 2015 National Indie Excellence Book Awards and in 2015 Beverly Hills International Book Awards, both in the Multi-Cultural Fiction category. She was one of 40 authors at the celebrated 2015 Authors on the Move fundraiser for the Sacramento Library Foundation dinner and auction.  She was featured on Capital Public Radio on April 2, 2015 and interviewed by host Beth Ruyak. She has participated in the Local Author Festival at the Sacramento Library and will be a presenter at the Great Valley Book Fest in October. She will also make presentations at the Woodland Friends of the Library annual meeting in June and at the Greenhaven/Pocket area Library in July. A former newspaper reporter and columnist, Klein, honed her writing skills in a busy newsroom. She mastered the art of Indian cooking in her own mother’s kitchen in the beautiful Blue Mountains or Nilgiris of south India. Klein currently lives in northern California and is completing a sequel to My Mother’s Kitchen, as well as a YA book based on Indian legends and mythology.
Mel u

Hi Mel,
Thank you for taking time to read My Mother's Kitchen and writing a review. Your review was excellent and very helpful. I saw an increase in sales on Amazon.com as soon as you published your review.
Thanks again,
Best,
Meera Klein

Meera, it was my pleasure. I hope to post on numerous more of your work.