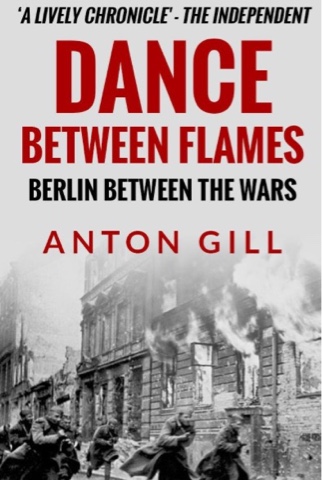 Dance Between the Flames Berlin Between the Wars by Anton Gill presents in a very well developed fashion a city readers of Christopher Isherwood, Hans Falleda, Stefan Zweig, and Alfred Doblin will at one recognize.  I read this book partially as background reading for my explorations of German language literature of the period and for this it is perfect.  I loved it when Gill talked about Zweig's short story, "The Invisible Collection" about a blind art collector whose family has tried to cope with hyperinflation by selling his treasured collection of prints and substituting blank paper for them.  I admit I really like it when Gill talked in a chapter devoted to an important street in Berlin, Alexanderplatz, about a novel set in Berlin between the wars of that name by Alfred Doblin.  I admit I enjoyed hearing he also found it a challenging work of genius, as did I.  Gill's literary references are very acute.  Zweig, for example, wrote little directly about Germany and Gill knows just the relevant works to help make his points.
All the historians say that it was the very harsh conditions imposed on Germany after their defeat in World War I that lead to the massive unemployment, hyperinflation that destroyed the middle class and began a long period of misery for most Germans. Gill explains this all in a very lucid fashion.   In a culture used to "father figures" as leaders, as Gill totally shows us, this paved the way for Hitler, made a second world war almost inevitable and helped produce the holocaust.
Gill begins with a depiction of Berlin after the war, with crippled soldiers all over the city.  Many had no homes or families left.  He slowly shows things getting worse and worse for most Berlin residents.  As depicted, most Germans valued order and security above freedom and we see how this leaves the Berliners vulnerable to extreme right wing fanatics and communists.  Gill does a very good job detailing the various players involved and showing how Hitler took over.  Hitler did not really like Berlin but he had to make it his main base of operations.
There Is a  very interesting chapter devoted to the German cinema   Gill explains how the images from classic German movies played into the hands of the Nazis.  Of course there are numerous Nazi monsters depicted in the work.  At first most Jews, liberals, and leftist intellectuals felt the Nazi regime would implode in a few months.  Jewish War veterans thought their Iron Crosses would save them.
He talks about Weimer Art, of which I am very fond, and how it came to be viewed as decadent.
He depicts the progressive development of Anti-Semitic laws.  I learned why Jewish stars were yellow.
In the climate of sudden extreme poverty, many turned to selling sex and drugs.  Gill spend a a lot of fascinating time detailing the anything goes Berlin sex trade.   People came from outside the country for cheap sex of all sorts.  Of course this attracted "unsavory" types happy to corrupt the residents of Berlin.  As depicted by Gill, homosexual prostitution and child sex were very much to be found.  It was kind of a "tommorow we may starve" so anything goes today feeling. Anytime someone had any money, they at once went out and bought something as currency for a good period was in free fall.  Those who had excess to foreign currency, especially dollars, were in heaven.  Huge buildings were sold for $500.00, bought from once wealthy Berliners now fighting off starvation. Fabulous meals could still be found in restaurants for those with foreign currency.  I learned lots of small things in this book.   Of course most Beliners hated this degeneration of their society, as they saw it. They hated above all the food shortages.   Of course they were eager to blame it on the Jews, who made up 3.7 % percent of the population.
Dance Between the Flames Berlin Between the Wars by Anton Gill is a very good book.  Many of those with enough interest in the subject to read the book will find they already know the basic story but Gill brings it all into clear focus, tying lots of things together.  I especially endorse it to literary autodidacts, sexual time travelers, those seeking information on the transition of masters of the German cinema to Hollywood, and those into Nazi history.  It reads as well as an elegant novel.
I don't think I would have wanted to live in the Berlin of the period but now I can better visualize it.
Mel u