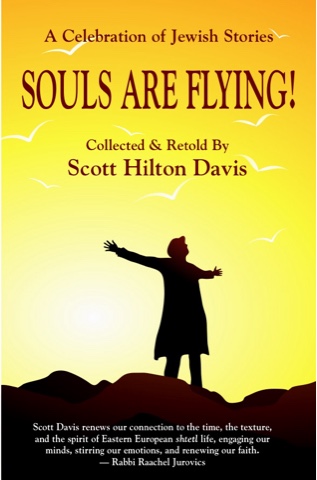 My introduction to Yiddish literature came when i was given by the publisher the ten volume Yale University Digital Yiddish Library.  This is a superb collection with very well done highly learned introductions.   I soon learned Yiddish literature is a subject of intense scholarly interest.  This left in my mind a literature not especially suitable for "light reading" and certainly not something for children.  I also learned Yiddish literature was a genre largely with only male authors.  I found it a subject of intense study worldwide. The original stories were often published in small circulation elite literary journals, just like the short stories first published in the Philippines, Japan,  Ireland, America and Australia.  The authors were deeply learned.  Now that I have the introduction of Scott Davis to his Souls are Flying - A Celebration of Jewish Stories I know that stories by the classic Yiddish writers, especially the briefer ones, were often read aloud by teachers to children in a culture where books were expensive.
I was fascinated to learn of traveling rental libraries of Yiddish books that would make routes in Eastern Europe stopping at shtetls. On the Sabbath the library owners were prohibited from moving on by religious strictures.  So they rented out books of short stories that could be read in a brief period of time and returned the same day  thus reducing the rental fees.  Short budgets made it hard if not impossible for most to rent a long novel let alone buy one.  Stories were assessable to everyone, just as in outback Australia the genre of the "Bush Story" arose consisting of brief fiction that a person could read in their limited leisure time.   Pushing this a bit more, in Ireland scholars have concluded there was not a large enough audience with the education or leisure time to read novels as there was in 19th century England so the short story became a dominant genre.  Like Ireland of the early 19th century, Yiddish culture very much had a tradition of traveling story tellers, helping to keep the culture alive.  Story tellers often relied on works by famous writers but felt at liberty to alter them to make them more accessible and enjoyable to audiences not highly educated.
Scott Davis, in my mind,Is in the tradition of the traveling story teller, whose love and intimate acquaintance with Yiddish literature gives him the ability and right  to with complete respect adopt classic short stories for modern audiences including young adults and children.   He wants to restore the tradition of reading Yiddish short stories aloud, to present the literature in a fashion that does not conjure up images of works that can be enjoyed or understood only by people of deep erudition in Yiddish culture.
Today I want to talk briefly about a very interesting totally enjoyable story "If I Were Rothchild", based on a story by Sholem Aleichem, on whose stories Fiddler on the Roof is based.  Very recently I read and posted on a story about Rothchild by Jacob Dinezon, "Apocalypse".  (This is included in
Memories and Scenes, Shtetl, Childhood, Writers- Jewish Stories by Jacob Dinezon edited and introduced by Scott Davis.)  Rothchild was a larger than life figure in Yiddish society, many thought he did not really exist while others saw him with wealth and power far surpassing historical reality.  I think when pressed for money by spouses and children many annoyed  men would say "I am not Rothchild".
"If I were Rothchild" is presented as if it a man telling an ever expanding story about what he would do if he were Rothchild.  He starts by saying he would make sure wives always have a few rubles for the Sabbath so they don't have to ask their husbands for money.  He begins with things he would do to improve conditions in the town the live in, building schools and better prayer rooms.  By the time the five page story is over he  is explaining how the world works and how he would bring about world peace and happiness if he were Rothchild. His ideas are actually quite good.  The story of the all powerful Rothchild banking family became fodder for anti-Semites but that is another story.
Souls are Flying - A Celebration of Jewish Stories also has short stories based on the work of I. L. Peretz and Jacob Dinezon.  I shall return to this collection.
I strongly endorse this collection for anyone wanting a way into the amazing world of Yiddish literature or seeking to introduce children and young adults to this area.
Scott Hilton Davis is a storyteller, playwright, and collector of Russian and Eastern European Jewish short stories from the late nineteenth and early twentieth centuries. Convinced of the historical, cultural, and ethical significance of stories by Sholem Abramovitsh, Sholem Aleichem, I. L. Peretz, and the lesser-known writer, Jacob Dinezon, Scott now uses storytelling and playwriting to bring works by these beloved Jewish writers to new audiences. He is the author of Souls Are Flying! A Celebration of Jewish Stories and Half A Hanukkah: Four Stories for the Festival of Lights. Scott is a former public television executive with more than thirty-five years of experience writing, producing, and directing documentaries and dramas. He lives in Raleigh, North Carolina." 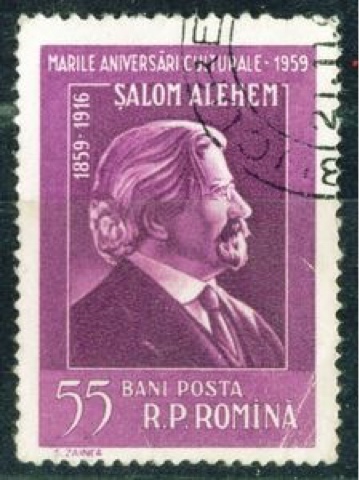