Bolshoi Confidential Secrets of the Russian Ballet From the Rule of the Czars to Today by Simon Morrison (forthcoming October, 2016, 512 pages) 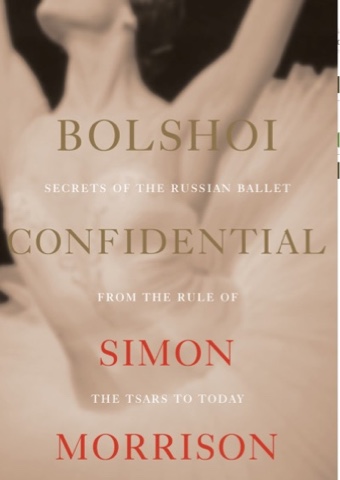 Bolshoi Confidential Secrets of the Russian Ballet From the Rule of the Czars to Today by Simon Morrison will become the book to read on the Bolshoi Ballet.  The book opens with a coverage of the current cultural importance of the Bolshoi to Russia.  Morrison tells us that the Bolshoi did not emerge to be called The Bolshoi Ballet until the theater where performances were held was rebuilt after being burned in 1812 during Napoleon's invasion of Moscow.
Morrison begins his history with an account of an Englishman who was the first true manager of the theater to run it both as a business and as a ballet company.  We learn a good bit about the business side of running the Bolshoi in the 1830s.  In the opening years, dancers, male and female, were often orphans or had been basically purchased for the theater from owners of serf theaters.  Most lived under very poor conditions.  The ballet needed not just dancers but musicians and story lines to preform.  The ballet was subject to censorship and many very patriotic works resulted from this.  Only the most affluent members of Russian society took an interest in the ballet and attended performances.  Of course a near starving peasant did not often ask "I wonder what is on at the Bolshoi j tonight".  Ballet performances were often very high end social events, especially when the Czar and his ministers were in attendance.  Ballet dancers often became celebrities and Morrison very interestingly profiles a number stairs.  Some became the mistresses of wealthy men, some got state pensions upon the end of their dancing years.  Most dancers barely made a living, some took in laundry, kept cows, or entered the demimonde world.
The theaters were wooden structures and their were several terrible fires  but always the Bolshoi survived.  Morrison very interestingly explains how the Russian revolution transformed the Bolshoi, an institution steeped in Czarist tradition, seemingly completely elitist. The book explains the great cultural importance of Bolshoi to Russia.  Morrison closes with an account of the grand reopening of a fabulous new theater for the Bolshoi under Vladimir Putin.
In any book such as this a lot of space must be devoted to social and political history and Morrison does a good job with this.
Bolshoi Confidential Secrets of the Russian Ballet From the Rule of the Czars to Today by Simon Morrison is a book those very into Russian culture, the history of dance and music history  will greatly enjoy.
I would recommend this book to well endowed libraries.  As to individuals, the $35.00 initial price seems daunting to me.  This aside, if you want to read what will surely be the definitive English language work on the Bolshoi, then this is the book for you.
I was kindly given a review copy of this book.
Simon Morrison is a professor of Music at Princeton
Mel u