The Underground Railroad by Colson Whitehead- 2016 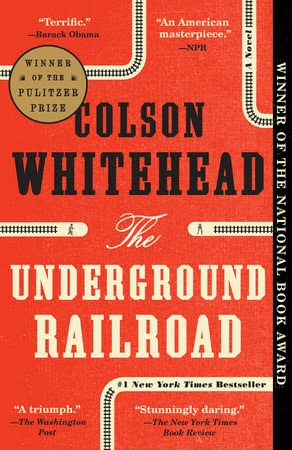 The Underground Railroad by Colson Whitehead won The 2016 Pulitzer Price, The National Book Award for fiction, and was selected by Oprah Winfrey for her book club. Like another recent wonderful novel by an American, Lincoln in the Bardo by George Saunders, it is set in America’s 19th century.  Slavery is central to The Underground Railroad, among the most poigant figures in Lincoln in The Bardo is a slave woman. (I suggest pairing these two novels with Kindred by Octavia Butler would be great for advanced English classes.)

Historically the Underground Railroad was an organization designed to help enslaved persons to make it to freedom.  Freedom for many meant disappearing into non-slave states in the north or Canada.  To slave owners escaping was theft, and was legally a crime.  Slave owners knew if one slave out of a hundred escaped, the others will get the urge to run.  Captured slaves were subject to terrible punishments, from whipping and branding up to death, often by lyncing. In one very vivid scene a captured slave is soaked in oil and set on fire.  All the other slaves were forced to watch the punishments.  In force at the time was
“The Fugitive Slave Act” which made helping an escapee a crime.

One of most despicable characters in the novel is a six foot six free black man, Ridgeway, who leads a band of slave catchers who track down people and return them, for a fee of course.

Slave women were subject to sexual abuse by their owners.  Slave women were expected to produce more slaves.  Central to the plot is Cora, an escaped woman.  She lived on a cotton plantation owned by two brothers.  Whitehead vividly depicts the terrible cruelty of slavery.

In the central conceit of The Underground Railroad, there is an actual railroad for escaping slaves, with trains, engineers, stations and hiding spots.   We meet very cruel people and very kind, of both races.

This is a very exciting book, we follow Cora on her escape and we fear for her.

Colson Whitehead was born in 1969, and was raised in Manhattan.
After graduating from Harvard College, he started working at the Village Voice, where he wrote reviews of television, books, and music.
His first novel, The Intuitionist, concerned intrigue in the Department of Elevator Inspectors, and was a finalist for the PEN/Hemingway and a winner of the Quality Paperback Book Club's New Voices Award.
John Henry Days followed in 2001, an investigation of the steel-driving man of American folklore. It was a finalist for the National Book Critics Circle Award, the Los Angeles Times Fiction Award, and the Pulitzer Prize. The novel received the Young Lions Fiction Award and the Anisfield-Wolf Book Award
Sag Harbor, published in 2009, is a novel about teenagers hanging out in Sag Harbor, Long Island during the summer of 1985. It was a finalist for the PEN/Faulkner award and the Hurston/Wright Legacy Award.
Zone One (2011), about post-apocalyptic New York City, was a New York Times Bestseller.
The Noble Hustle: Poker, Beef Jerky & Death, a non-fiction account of the 2011 World Series of Poker, appreared in 2014.
The Underground Railroad, a novel, was published in the summer of 2016. It won the Pulitzer Prize, the National Book Award, the Carnegie Medal for Fiction, and was a #1 New York Times Bestseller.
Colson Whitehead's reviews, essays, and fiction have appeared in a number of publications, such as the New York Times, The New Yorker, New York Magazine, Harper's and Granta.
He has received a MacArthur Fellowship, A Guggenheim Fellowship, a Whiting Writers Award, the Dos Passos Prize, and a fellowship at the Cullman Center for Scholars and Writers.

I highly recommend this book.

I've only read a couple of books on the subject and found the cruelty overwhelming and I felt very dejected for days after. Despite the few that got away, the majority were held in absolute cruelty.

Mystica, there is great cruelty depicted in this novel. Thanks very much for your visit and comment

This sounds like a difficult to read but extremely valuable and powerful book about the Underground Railroad. Excellent review!

I really like the way that making the railroad a tangible thing can change the way you think about the significance of it having been built and maintained and just how hard it would have been to coordinate and plan and operate all of those communications and excursions. It was also, along the way, a thoroughly engaging story. I've only read one other Of his novels (Zone One) but I had wanted to read the rest of his books anyway, and reading this one only made the idea all the more appealing. You might also enjoy James McBride's The Good Lord Bird, although the tone is different.