“The Smith: Or A Tale of a Man that Poisoned His Wife” - A Short Story by M. J. Berdcyzewski - 1902,translated from Yiddish 2018 by James Adam Redfield 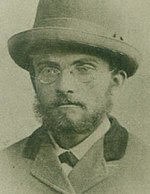 “The birds, real and imagined, speak Yiddish, and the wind at my window speaks Yiddish —because I speak Yiddish, think in Yiddish. My father and mother, my sisters and brothers, my murdered people seek revenge in Yiddish. No world language is comparable to Yiddish, with its unique sighs, its unmatched sense of humor. After the melody has died away and the tears have ebbed, there remains an echo that travels on the wind. Do not wipe out the language that accompanied your people to the mass grave, the echo says. Do not take up the murderers’ sword with your own hand. Do not allow the word that bloomed in bitter climes to wither. Remember Amalek. Remember Hitler. Do not extinguish the spark that smolders in the ashes. Those who deny the past can have no future. Remember”. Blume Lempel

Today’s story is very dark, a story of murder, of hatred of women, including a vivid description of death by poison.  Like many a short story, it is a tale told on a train trip by a very dispicable man to a trapped listener.

The narrator relays to us the story.  A man was more or less forced by his family into a marriage.  He described his wife as a woman with no good qualities, nasty, ugly and a terrible housekeeper.  He grew to hate her but it got much worse when his younger brother married a beautiful, kind, and loving woman devoted to being a good wife. His jealousy drove him to poison his wife.  As she is dying he cries out trying to make his neighbors think he does not know why his wife is dying.  He ends up sentenced to six years in prison.  He is back now.

This story is an important edition to my expanding admiration for Yiddish Literature.

I read this story in The 2018 Pakn Treger Translation Issue from The Yiddish Book Center.

Micha Josef Berdyczewski, born in Ukraine, died in Berlin (1865–1921); Micha Josef Bin-Gorion from 1911 on) was a prodigious man of letters in multiple languages (Hebrew, German, Yiddish) and literary forms. He is remembered as an innovative prose stylist and polemicist on Zionism and Jewish identity; as the “Jewish Nietzsche” (Y. L. Peretz’s epithet); as an essayist and scholar on Jewish history and religion through the ages; as an anthologizer of Jewish folklore; and as a pioneer in Jewish autobiography. His Yiddish writing, however, remains obscure and disconnected from this vast corpus due to its short period (1902–1906), spare idiom, and restricted set of themes—themes inspired by a return to the shtetl and the language of his youth, through which he hoped to reanimate the spirit of the Jewish people. And yet (as Sholem Aleichem was among the first to note) there is a remarkable emotional range and realistic depth in this collection of stories, one acts, character sketches, and rewritten folktales.