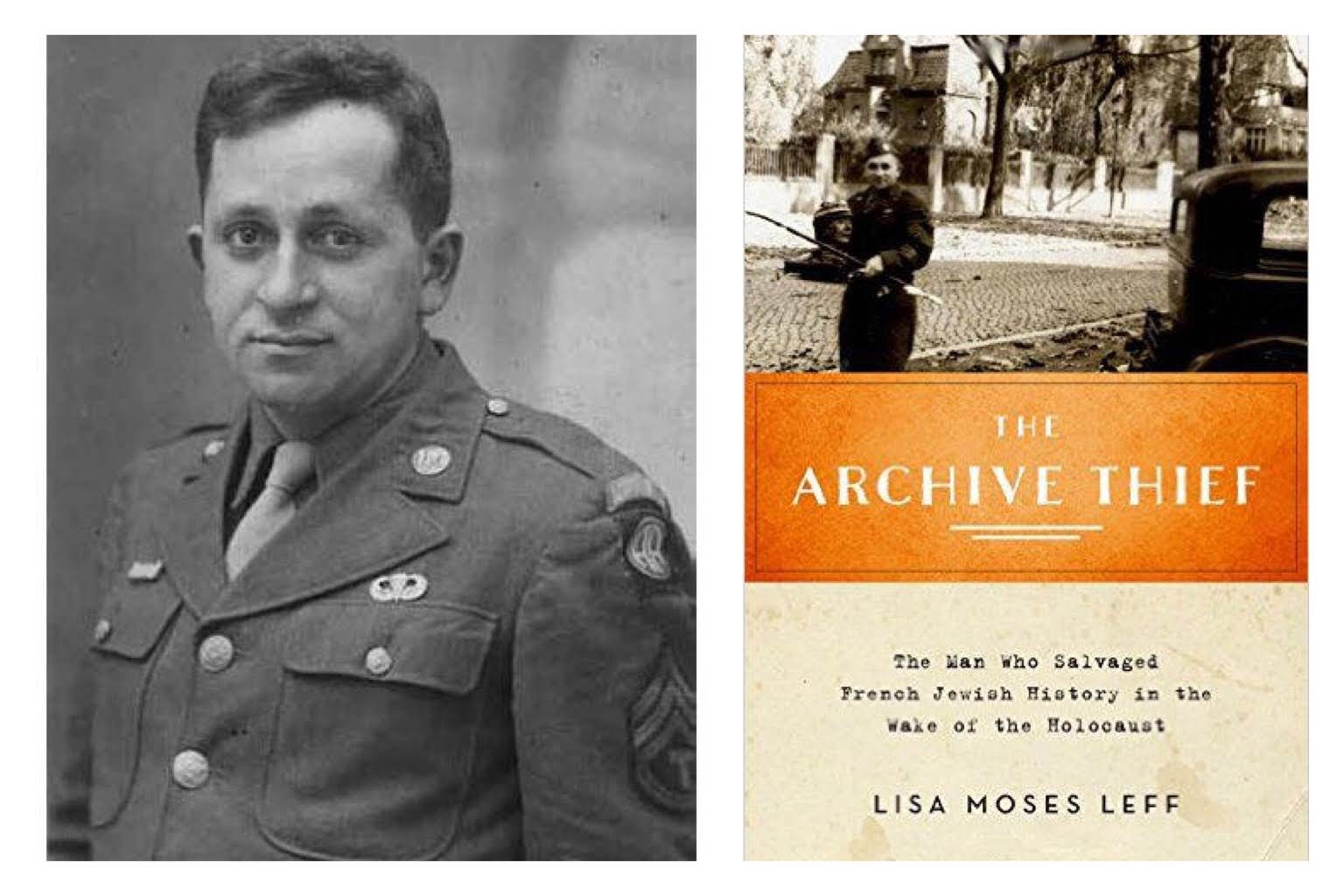 A lecturer by The Author

THE ARCHIVE THIEF The Man Who Salvaged French Jewish History in the Wake of the Holocaust LISA MOSES LEFF is part of my participation in Paris in July 2018,an international event devoted to all things Parisian

Already there are lots of very interesting posts from food bloggers, Francophiles, travel bloggers, as well as book bloggers.  Normally I don’t venture far from the international book blog community so for me this event is an excellent way to expand my horizons.

He spent many years in Paris

Zosa Szajkowski is a fascinating figure.  He left Poland for France then left France for New York City driven out by concerns for his safety.  .Much of his family in Warsaw had been murdered by the Germans and their Polish backers.  (As I read on in Holocaust studies i see many try to blame the Holocaust not just on the Germans but the Nazis, trying to give Germans an excuse. The truth is clearly the vast Majority of Germans supported the idea of killing all the Jews. In all the areas the Germans conquered they found very willing collaborators.  Leff very convincingly shows us the willingness of French at all levels to turn over Jews, then steal their property.) Szajkowski was a war hero, a briiliant autoditactic, a saviour of huge amounts of historical documents related to Jews in Paris and he was a thief, stealing documents and selling them for income.

I first became aware of this essential book through the news letter of The Jewish Book Council.  I will quote from the book to give an overview of the scope of the work:

“At the center of the intrigue is a peculiar individual: the historian Zosa Szajkowski (Shy-KOV-ski, 1911–1978), a pioneer in the field of French Jewish history. Szajkowski wrote scores of articles in the field, most on topics no one had ever researched before and many of which are still considered indispensible decades after they were written. Beyond his scholarly work, Szajkowski was also a devoted collector of French Judaica. He began his collecting in the late 1930s when, impassioned by Jewish history, he solicited donations from French Jews who had materials of historical interest among their family papers. In the aftermath of the Holocaust, wracked by grief and determined to facilitate the writing of an objective history of catastrophe, he gathered evidence of the persecution from Jewish leaders in Paris and from the wreckage of bombed-out buildings in Berlin. Many Jews France and the United States saw his collecting of those papers as a heroic effort to preserve the evidence for posterity. But in time, this rescuer became a thief. Most of the documents he acquired in the 1950s—mostly pertaining to Jewish history in France since the seventeenth century—he stole from the archives. Some were taken from state archives, where he stealthily evaded the gaze of the archivist in the “panoptical” reading room, often cutting old documents out of bound volumes to evade detection. Others were stolen from the private collections of synagogues and private Jewish libraries, institutions that had only recently begun to recover from what had happened in the years of Nazi occupation.”

I will just talk a bit about some of the numerous things in this book that struck me.

Leff talks about the assembling of Archives of Jewish documents.  There were serious differences of opinion about what should be done with the largely Yiddish documents recovered after the war.  Some said return them to places they were stolen from.  Others, including Szajkowski countered that these societies were destroyed.  They felt the best way to secure these documents was to move them to the United States, mostly to the Yivo Institute and several high end universties in The New York City area with some sent to Israel.  Leff helped me understand archiving for sure helped preserve Yiddish Jewish culture but it also made it harder for Jews left in Europe to maintain a sense of identity.  (I greatly admire The YIVO Institute and think moving the documents was best.)

Szajkowski loved his work.  He was as knowledgable as any highly degreed academic.  He was not able after the war to obtain a full time position at an American University as he did not even complete high School.  He was fluent in German, French, English, Polish and Yiddish. He served in the USA army in Germany as an interpreter during the de-Nazification process.

Leff, as she must, talks about fate of Jews in Paris under German rule.  She talks about the two myths about the behaviour of the French:  one was that almost everyone wanted the Jews gone so they could steal
their property and the other myth was that most of the French were secret resistors.  The truth is in Middle but this was not France’s finest hour.  In a compromise the French puppet authorities initially agreed to arrest and turn over foreign born Jews, Yiddish speakers, for transportation to death camps.  The hope was French Jews, many of whom have roots going back to around 1500 when the Jews were expelled from Spain and some to times before Charlemagne in the Eighth Century could stay in France. They rarely spoke Yiddish or Hebrew. One of the conflicts in European Jewish culture in the 1930s was the fear of Western European Jews who dressed, spoke and looked just like their countrymen that they would be dragged down by the flood of Eastern European immigrants.  Soon enough all French Jews were subject to deportation.  Leff illuminates this period of French history.

We learn about the business side of selling stolen documents.  Librarians in France trusted him as he was really a great expert.  He would use a knife to cut pages out of old books, removing all marks of ownership.  In addition to institutional buyers, he was connected to wealthy American collectors.

His post war home was in New York City.  We learn about his never quite settled down private life and his marriage.

At age 67 he was charged with stealing documents from a New York City library.  He had been caught once in Paris but was let off with a warning.  Knowing his reputation would be ruined, he committed suicide.

This is beautiful book, bringing to life a man anyone interested in the preservation of Jewish history must respect.  In a better world he would have had an endowed research chair at Harvard.  There is just so much to learn here about archives, French Jewish history, the Holocaust and much more.  All libraries who can should stock this book.

I highly recommend pairing this book with Who Will Write Our History: Rediscovering A Hidden Archive from the Warsaw Ghetto by Samuel Kassow.

Both of these works are among my autodidactic selections.

he sounds like a brilliant person; perhaps he had a bad case of PTSD and couldn't help stealing papers he thought he was saving.... sort of a desperate accumulator... i can see that happening...

I think this could be a tough book to read emotionally but inspiring in a way. And what a gift to have saved history during this time. As one who looks at family genealogy, I am always impressed that someone "back when" had the courage and foresight and sense of history to save valuable personal materials.

Thanks so much for stopping at my blog this week. I'll miss Paris In July!