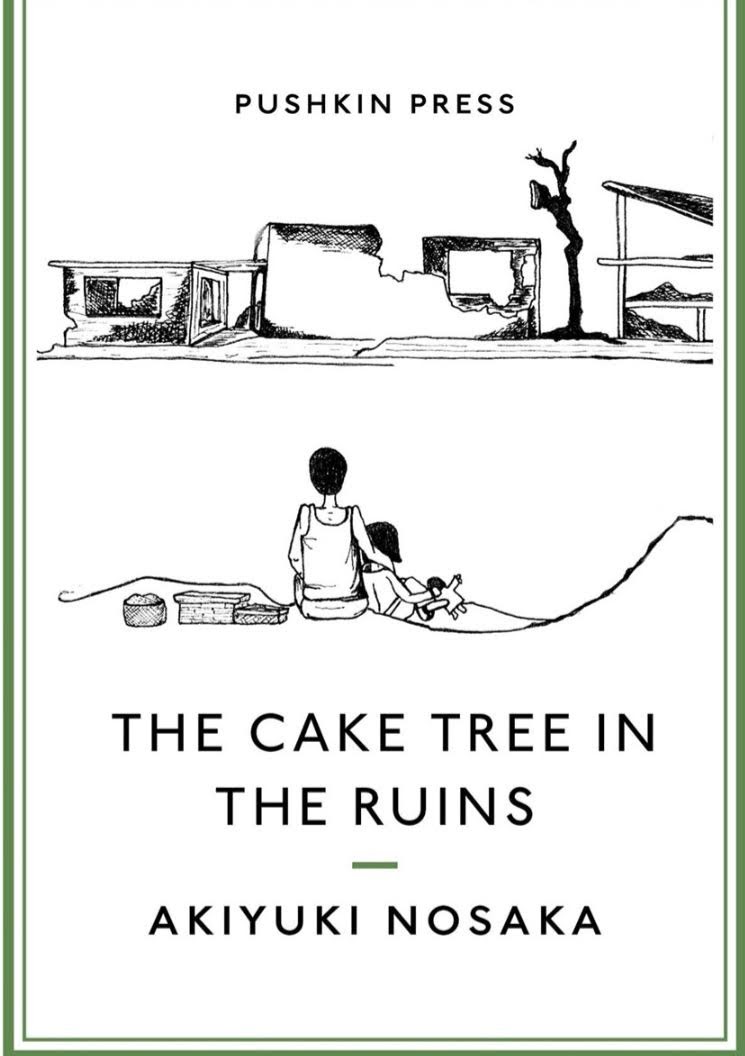 “On 15th August, the war the grown-ups had started finally ended. The whole of Japan had been burnt to the ground and everyone was hungry, but amidst the ruins stood just one cake tree. It was always surrounded by children gorging themselves on its delicious leaves and branches, but the grown-ups passed right by without ever even noticing it was there.”

Post World War Two Japanese fiction is a World Class cultural treasure.  Underlying much of the tremendously creative and often profoundly wise literature is the impact of Japan’s defeat in the war.  When The Emperor addressed his subject on the radio on August 15, 1945 and told them Japan had surrendered and that he was not a god, the cultural basis for Japanese society was devastated.  Kenzaburo Óe has said the most valuable result of the atomic bomb attacks was in the wisdom the terrible suffering brought to the survivors and care givers.  Some writers,  responded by writing elegant accounts of a destroyed tradition, others shifted to very violent sexually graphic works representing a now limit free ethos, others to magic realism. Some, like Akiyuki Nosaka strives to capture the pain of ordinary Japanese.

In “The Cake Tree”, set in a Kobe after it was firebombed in 1945
we are presented a very moving account of the daily existence of a group of children, ages five to ten.  These lines show the impact on the children

“Adults were better at enduring these conditions, but it was really tough on growing children, especially since it was the grown-ups who had gone to war in the first place while the children were simply innocent victims. For those children between the ages of five and ten in 1945, it really was a miserable existence—they had never eaten anything tasty, while however hungry the grown-ups were now they could remember eating their fill of delicious food in the past. They would reminisce about the tasty eel in suchand-such a restaurant, and the mouth-watering tempura in another, especially the shrimp and vegetable fritters”

The search for food became the work of the children:

“Rice had been rationed since 1941, sugar was hard to come by, the cakes and candies that had once flooded into the ports had vanished, and by the end of the war the only sweets available were dried bananas and sweet potatoes. In order to survive, the children formed gangs to go scavenging for the tomatoes, cucumbers, pumpkins and other vegetables people had started growing in the ruins. They knew it was wrong to steal, but survival was more important to them, and they could sniff out exactly where tomatoes were turning red or pumpkins were swelling up nicely. “Hey, what’s this tree?”

The tree’s story is just so beautiful, magic realism with the touch of a master.  I don’t want to tell the marvelous close of this story but I loved it.  Nosaka, drawing on his own experiences, in just a few pages bringing to life a world now largely forgotten

This is the title story in a collection of that name forthcoming from Pushkin Press. There are eleven other WW II era stories in collection, one about a whale that falls in love with a submarine and a very deep story about the relationship of an American POW and a little girl.

All into Japanese fiction, especially works about the war, need to add this to their to be read list.  I will be returning to these stories for more
posts.

Akiyuki Nosaka was born in 1930 in Japan, and was a member of the yakeato generation, ’the generation of the ashes’, who survived the devastating firebombing of Japan during the Second World War. Nosaka was an award-winning novelist, short-story writer, essayist, lyricist, singer and politician. His adoptive parents were killed in the Allied firebombing of Kobe, and after he was evacuated with his sister, she died of malnutrition. These experiences inspired the stories in this collection, as well as one of his best-known works, Grave of the Fireflies, which was turned into a hugely successful Studio Ghibli film (called ’a masterpiece’ by the Guardian), and which is forthcoming in a new translation from Pushkin Press. Nosaka died in 2015. From Pushkin Press

This sounds like a very touching short story, Mel. I will definitely keep it in mind for future reading. Thank you for this post.