"A Christmas Tree and a Wedding" by Fyodor Dostoyevsky 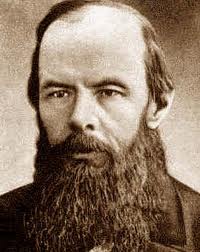 Yesterday when I was reading two short stories by Maxim Gorky I noticed that a story by Fyodor Dostoevsky (1821 to 1881) was included in the same collection of short stories.    The story was "A Christmas Tree and a Wedding".   I read pretty much all of the major works of Dostoevsky way back in the mists of time but I had never read any of his short stories.   This being Christmas season, it seemed almost like a sign that I should read "A Christmas Tree and a Wedding."  (There is no translator credit given for the story at my source.)    I am glad there is now at least one post on Dostoevsky to be found on my blog.

The narrator of the story has just been to a wedding but he wants to talk about a Christmas party he went to that he found more interesting.   I liked this story a lot.   As one would expect, there is great psychological acuity  shown even in this brief story.   The party was supposed to be a children's party but it was really given so the host would have the opportunity to talk business with rich members of the community.     The wealthiest was Julian Mastakovich.    The story was written about a time and place where to be heavy was seen as a sign you were rich.
.
The narrator has nobody to talk to so he observes closely the children at the party.   It was kind of sad to see how the children were given gifts based on the social standing of their parents and the children of servants and such already know just to keep silent when the children of the rich get fancy gifts and they keep much less, if they are lucky.

The host has a beautiful eleven year old daughter.  (As you read older literature you have to accept that girls were seen as potential marriage-and otherwise-partners at a much earlier age than they are now.)   The wealthy unmarried Mastkovich calculates how much of a dowry the girl will probably have when she reaches the proper marrying age of 16.   He is of course at least as old as her father.   He kisses the girl on the forehead and she is repulsed and runs away.   The girl goes to a playmate for protection.   Mastkovich causes a scene running after the boy and tries to get a promise of love from the girl who he clearly intends to marry.   I will leave the rest of the simple plot unspoiled.

For sure this is a good short story very much worth reading.

You can download Best Russian Short Stories, in which the story appears, here in numerous formats, all free.

I've only read Crime and Punishment by this author, and I think I was a bit young for it when I read it. I'd like to give it another go sometime...

This is one of my favorite short works by Dostoyevsky. Frankly, I would almost consider anthologizing it in a collection of horror stories, thinking about the future of that little girl.

I agree. I think it's a great example of Dostoyevsky's skill with short works where "less is more."