"Twenty-Six and One" by Maxim Gorky 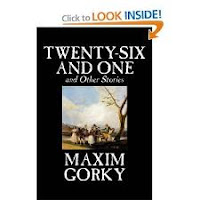 Maxim Gorky (1868 to 1936-Russia) was the "pet" writer of Joseph Stalin.   For many years to criticize the work of Gorky in public in Russia would get you a trip to Siberia or worse.  Not really surprisingly,  many say Gorky was murdered at the order of the director of the secret police.   The great Russian writers had written about the peasants in a romantic way.   There were millions of people in late Czarist Russia so poor that they wished they were serfs on the estate of a Turgenev or Tolstoy.  (There is some background information on Gorky in my prior post on two of his short stories.)   Some say Gorky invented as an important literary figure the character of "The tramp".   (A  tramp was basically a displaced serf or peasant forced out of his ancestral position of slavery and security and forced to roam Russia looking for food and work.)     If this is right, then Gorky paved the way for Waiting for Godot, among many other works.


Gorky was a hugely productive writer with a giant ego.   In addition to 30 short stories he wrote all sorts of things including a 1000 page memoir, operas, and lots of political writings in opposition to Czarist policies and later in support of the early Soviet state.


"Twenty-Six and One" (sometimes it is translated as "Twenty-Six Men and a Girl" ) is one of the most famous of Gorky's stories.   The story is set in a large bakery factory.   The twenty six men made biscuits.   They are kept locked in their work place as virtual prisoners.  Their lives are  never ending toil and unrelieved tedium.   They have been together so long they have run out of anything to say to each other than to pursue endless petty quarrels.   Of course there are no women in their grim lives.   They have one joy they all share.   A beautiful sixteen year old girl Tanya visits them every morning and they give her six free biscuits.   They idolize her for her purity and goodness and beauty.  (It seems from this and his other stories, Gorky may have wanted to set the poor of Russia free but women were judged by their looks mostly.)   One day a handsome soldier, a blond, stops by the bakery.   He tells the bakers he knows that men like them cannot attract any women but as he is so handsome and bold and manly he can get any woman he wants.   Some of the bakers foolishly tell him "No you cannot get our pure Tanya".   A bet is quickly made.  The soldier has thirty days to "capture" Tanya.  I will leave the rest of the plot untold.   Gorky knows a great deal about what extreme poverty can do to people.   If ever there was writer who spoke for those without a voice, Gorky is it.


Gorky lets us see exactly how the bakers lives.  We feel their misery.   These are not the idolized poor in a Victorian serial written for ladies to read over tea.


I think a lot of potential readers of Gorky are kind of turned off by his status as a Soviet icon. Gorky for sure let himself be used by the state in return for wealth as well as great fame.    At one time in the USA or UK liking Gorky would  have been almost like proclaiming your self a communist.   His work was required reading for generations of Russia school children.


I really have enjoyed reading the three Gorky short stories I have read so far.   I endorse them to all and see them as near must reading for those into Russian literature and those who want to learn more about life among the "real people" in late Czarist Russia.


You can download this and other works by Gorky at Manybooks.

Please share your experience with Gorky and if you have no experience yet, give the stories I have posted on a chance.


One of the very great things about short stories is they let us "try out" a new to us writer without a huge amount of time invested.

"If ever there was a writer who spoke for those without a voice, Gorky is it" is a fine line. True, he wrote mainly for, and about, social outcasts in his time. I read Gorky in school and college over two decades ago and, frankly, remember very little what I read then. It's heartening to know that we can have so many marvellous short stories at the click of a mouse.

Prashant C. Trikannad-thanks for your comment-you are so right about it being so wonderful to have 1000s and 1000s of literary works of all sorts just a free click away-I admit really very much so for people like me who live where there are basically no public libraries-the internet opens up so much to us

I've read Gorky's Mother and My Childhood and loved them. Especially Mother. In it you will find female characters who are much more evolved and its not just about their looks. The characters of the many women revolutionaries is surprisingly ahead of its times. Not to mention the mother herself who is so interestingly drawn.

Sorry to go off topic but do you plan on doing the dickens event u once mentioned? when is it to be? I'd like to take part and i'm making a reading list for 2012. Definitely plan to be a part of Irish short story week too.

On Dickens-there is already a blog that will have a 6 week once a week Dickens day starting in Jan and ending on Dickens 200 Day-I will join in that-I have now begun rereading A Tale of Two Cities, then Great Expectations, the Bleak House then Hardtimes-I will for sure do a Dickens 200 day post but plan no event-I really hope a lot of book bloggers will post on Dickens for Dickens 200 day-I am open to a joint event if you have ideas

I've read a lot of the Russian writers, but lack of any Gorky is a serious "cultural literacy foul" on my part.

The story you featured sounds wonderful and I will add it to my list for my personal 2012 Short Story Reading project.

I haven't read Gorky either, and I admit it's largely because of his status as Stalin's "pet." But I think I'll give him a try at some point, if nothing else but to broaden my perspective. I like how you describe the fact that he doesn't romanticize poverty; that's important at least.

Though I'm very much aware of Gorky I have not read anything of his. So thanks for the review and for the link.

Just stopping by again to let you know that I read "Twenty-six and One" along with my coffee and breakfast at the local Panera Bread this morning. (I thought it would only be appropriate to read this story at a "bakery" :-) )

Anyway, I really liked it and, like Oliver Twist, want some more...

I find this post after many a year, and I cannot help but protest to your description of Gorky as Stalin's "pet" writer. Gorky was consistently at odds with the new Soviet authorities and could, by any stretch of imagination, be qualified as anyone's "pet" writer.

George Spinos- thanks for comment a visit. All evidence I found online indicated he was Stalin's bet for a long time. Many pictures of him with Stalin, etc