"A Large Girl" by Mridula Koshy 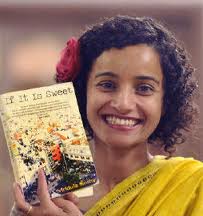 I am very pleased  that The Reading Life was recently recommended by The Economic Times of India,. the leading financial daily of The Subcontinent.

There is no literary culture with roots older than that of India.   I will always admire Edmund Burke for telling the English that they had no right to govern a region whose culture is much older than theirs.  Many of the geographic boundaries that created these countries were created by the British or are consequences of their misrule.       Some of the writers featured  will be internationally famous, such as Salmon Rushdie, Saadat Manto,  and R. K. Narayan but most of the writers I post on will be authors on whom there are no prior book blog posts.    There are numerous books and academic conferences devoted to exploring the colonial experiences of India and Ireland and I will look at these stories partially as post colonial literature.   My main purpose here is just to open myself up to a lot more new to me writers and in this case most will be new to anyone outside of serious literary circles in the region. I am hoping in a small way to create networks of readers worldwide.    Where I can I will provide links to the stories I post on but this will not always be possible.

Official Biography from her blog

Mridula Koshy is the author of Not Only the Things That Have Happened (forthcoming from Harper Collins India). Her short story collection, If It Is Sweet(Tranquebar Press, 2009; Brass Monkey, 2011) won the 2009 Shakti Bhatt First Book Prize and was shortlisted for the 2009 Vodafone Crossword Book Award.

Koshy lives sometimes in New Delhi and sometimes in Portland, Oregon, and all the time with her poet-schoolteacher partner and three exceptionally wonderful children.

She was many other things before she became a writer: a cashier at a Kentucky Fried Chicken,swap-meet sales clerk, backstage dresser at fashion shows,waitress who set a table cloth on fire, polisher of silverware in the back room for many months afterward, writing adviser, a professional advocate of multiculturalism (it was the late 80s), a painter (not of the fine arts variety), receptionist at a law firm (fired for losing phone calls), collator of tax forms, union organizer, community organizer, reading fairy at the library.

"Large Girl" is a very interesting story about the long term relationship of two women.  Janet was once the "large girl" made fun off in school for her size and the narrator of the story, once her schoolmate.   It is told through the reconstruction of the memories of the narrator who looks back to when she first knew the other girl, many years ago, to now when they have an intimate relationship.     The large girl was the first one to develop breasts. They attended a schooel run by nuns but it does not seem they are necessarily Catholics.    One day the large girl did a jump on Sports Day and her skirt rose up exposing her underwear.   Everybody laughed but the narrator.  "But there were somethings I knew even then, maybe about the world, maybe about me.   In any case the last thing I wanted to do was laugh".   I already totally liked the narrator.   Now something unexpected happen, the narrator says she wanted to "slip my hands down those trunk-like legs".  They get older together in the school.  The large girl brings in a book about Marilyn Monroe with lots of glossy provocative pictures. The girls get a bit excited over this.

At a dance toward the end of school she dances with Janet and she says it was the first time she found herself  in her embrace.  Janet has a tragic history. (I do not want to tell too much of the story as you can read this online and I urge you to do so.).   The nuns and Janet say she is an orphan but what really happened is that her father murdered her mother.

As the story progresses fourteen years into the future, we do not learn how the two women developed anintimate relationship and how sexual it was, but Janet's favorite reading position is lying full length on the top of the narrator.  The narrator is now married and has children.  There are class differences between the two women, Janet was poor and the narrator from a rich family.   Their relationship goes into phases.   Janet questions her endlessly about her relationship with her husband, including their sex life.   Maybe Janet has not had experiences with men as she fears her size will turn them off or maybe the way her father treated her mother turned her from them, one can understand that all too well.

There is a lot more in this story.  It is a wonderful account of the development of a friendship and an intimate relationship between two women.   I really liked the fact that Koshy did not precisely define the full terms of the relationship of the two women.

"The Large Girl" is a very good short story, beautifully written with great emotional intelligence and I will read more of her work.

What an interesting writer and a fascinating sounding story. thanks for the introduction, Mel. I look forward to this new discovery!

Thanks for the link, Mel. Loved the story and such a poignant ending.

hi..thanks for the introduction to the author and the story. where can i find a link to the story?

I was currently reading *if it is sweet* and just after I read Large Girl is when I stumbled upon this blog post. She is a beautiful and soulful author indeed!