The Graves Are Walking: The Great Famine and the Saga of the Irish People by John Kelly

The Graves are Walking:  The Great Famine and the Saga of the Irish People by John Kelly (2012, 392 pages, Henry Holt and Company) 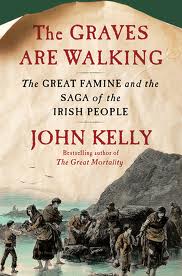 You cannot begin to understand the post WWII Japanese novel (one of my core interests) without understanding the overwhelmingly powerful impact defeat had on the Japanese psyche.   You cannot understand writers from the American South like Flannery O'Connor, William Faulkner or Eudora Welty without a basic knowledge of the history of race relations in the region.   Likewise and perhaps even more so one cannot begin to understand Irish literature and culture without knowing what happened during the terrible famine years of 1845 to 1852.   I have read other books on the famine, The Great Hunger: Ireland 1845 to 1849 by Cecil Woodham-Smith, considered prior to Kelly's work the best book on the famine, and Famine, Galway's Darkest Years by William Henry, a work more in the style of popular history but very much worth reading but I suggest that Kelly's book be read before these works and if you will read only one for sure read it.  For most readers one will suffice.

There has been a great deal of research in famine history since the 1962 publication of Woodham-Smith's book, archives have been opened and researchers can share their finding across the internet .    This has helped John Kelly produce a more balanced, better informed overview of the Irish Famine years.   Anyone interested in Irish history and literature will greatly benefit from this book.   The basic facts alone may just be cold numbers now (about twenty five percent of the population died or left the country because of the famine).   More people died in the famines of Russia and China but in  terms of percent of the people killed, Ireland's was worse.   I think perhaps the famine and death in Cambodia caused by the Khmer Rouge (1970 to 1975-about one third of the population) maybe be worse as it was a deliberate attempt to destroy a culture but I will let others sort out this.

The first thing that struck me about The Graves are Walking:  The Great Famine and the Saga of the Irish People by John Kelly  was the very high level of the prose.   Even if I was not strongly interested in Irish history, the beauty and evident high intelligence of the work would have been enough for me to greatly enjoy reading it.

I will not retell the history of the famine set out in The Graves are Walking:  The Great Famine and the Saga of the Irish People but will just say a few things about why I found this book so worth reading and I will talk of a few of the things that very much impacted me and I will relate it a bit to my readings in Irish literature.  The famine did not take place in a political void and the standard approach is to see the English as the villains in this story, exporting food from Ireland while the people starved and this is not to far from the mark but the truth is not that simple and Kelly helps us see that.

He begins the work with some very helpful basic history and economics of Ireland, starting around 1800.   He lets us see why the potato became the basic crop of Ireland, a very small plot could produce several thousand pounds of produce, enough to easily feed a large family.   Potatoes are very nutritious and easy to cultivate, compared to the basic food crop of the Philippines, rice, very easy.     The problem is occasionally the crop will fail due to disease.   One problem was that the failures were not frequent and there were not administrators with a knowledge of the past to see issues coming.   I admit I did not know that the potato crop failed also in much of Belgium and the Ukraine at the same time but without as serious consequences and I found this very interesting.

Kelly also talks about the attempts of experts and politicians to explain the causes of the potato crop failures.    Some English politicians saw it as the wrath of God coming down on the Ireland for what they saw as the bad life styles of the Irish, given in English eyes to laziness, breeding to many children, drunkenness and some even saw it as God's way of repudiating the Catholic church.

Kelly lets us see the attempts of politicians to cope with the problem.   Some tried very hard to help and some seemed to welcome the famine as a way of cleaning Ireland of people who could not support themselves and as a way of eliminating economically inefficient small farmers.    I was very surprised to learn that many large land owners paid for passage to America and Canada for their tenants, just to get rid of them as they had to pay a per head poor tax.   In some cases, one simply had to show up at the dock and there would be agents giving out free tickets.   Kelly shows us how whole villages emigrated together.   Kelly explains how it was the very backbone and future of Ireland that left, its young healthy people

The famine years brought out the best nature of many people.  Lots of fathers worked themselves to death trying to feed their families and mothers starved to death to try to keep their children alive.  In some it brought out the worst, parents left starving children behind and there was a great upswing in violent crimes.   Many of the Catholic clergy tried to help their people, some died with them and many left on the same boats.

In reading William Carleton's classic novel The Black Prophet:  A Tale of the Famine Years I was struck by the sheer venality of people who tried to make money from the misery of the victims of the famine.  One particular odious profession was that of Hair Harvester.   Irish women were famous for their beautiful hair, in which they took great pride.   The Hair Harvesters would go to the worst famine areas and buy the hair from women in the area, the worst of them waited until the woman died so they would not have to pay her.   The hair was then made into wings in England.   There were also those who bought the clothes from the starving and those who roamed the roads looking for corpses to remove their clothing.   Most of those who died on the road were found naked.   The clothes were shipped to England where they were pulped.

Kelly explains how many more people died from fevers than actual starvation.   The fever caused the deaths to reach the well fed.   Many doctors knowingly put their lives at risk, and lost them, to help the poor.   It was very interesting to learn that the start of the 19th century, the Irish were healthier as a group than the British.

Kelly in one very sad chapter explains how the animals of Ireland began to starve also, even the crows died of starvation.   What few cows were left were pitiful sights.  Kelly also explains exactly the transformations that take place in the human body as one starves to death.

Kelly devotes enough space to the emigration experience to let us see just how terrible the passage over the Atlantic was (some ships had fifty percent death rates).   He also retells the story of the reception the Irish met in the USA and Canada and the legions of con men and exploiters (mostly fellow Irish) who worked hard to cheat them as much as they could.    Many Irish arrived with some money from selling their farms.   He also talks about how the Irish helped and were helped by New York City politicians of the Tammany Hall Era.  He tells us how many Irish did well in America by their extreme hard work and high intelligence.

The Graves are Walking:  The Great Famine and the Saga of the Irish People by John Kelly is first rate history, Kelly documents all of his claims in his references and footnotes.   It is  a beautifully written almost lyrical at times story about one of the great tragedies of the nineteenth  century.

There are many more fascinating things in this book, far many for a blog post to convey.


John Kelly is an author and indepedent scholar now specializing in the intersection of European history with health, human behavior, and science, all of which were his previous subjects. His The Great Mortality: An Intimate History of the Black Death, the Most Devastating Plague of All Time is considered a classic.

In the interests of full disclosure, I was provided a free copy of this book.

Wonderful review, Mel. The book does sound quite beautifully written.

Suko-thanks very much as always

I read The Great Famine many years ago. It was an eye-opener even though my mother had referred frequently to the famine, demonstrating what you point out about its being a seminal and enduringly traumatic event in Irish history, an Irish Holocaust. I've found it hard to impress this on people, though, first because it seems to them to have taken place so long ago (actually, my mother could, had she been born in Ireland, have spoken with someone who survived it) and also for the other reason you mention--the number of people affected, enormous in proportion to the population but not up to 20th-century famines in China, e.g.

I remember Brendan Behan appearing on a TV show with the author of The Great Famine and confessing that he had trouble reading it for weeping. I imagine my mother reacted the same way.

Kelly's book sounds like a solid contribution. Thanks for the heads-up.

pianomusicman-thanks so much for your very interesting and valuable comment-thanks for sharing the experience of yourself and your mother.

Your blog header is lovely Mel. Sorry I haven't been around much, as I haven't had a lot of time for blogging lately.

This sounds like a really good book. Thanks for sharing!

WOW I have soem catching up to do here Mel. Expecially because I love everything about Ireland.....Bit I'm afraid the last thing I read from the region was about art theft....written my Matthew Hart.