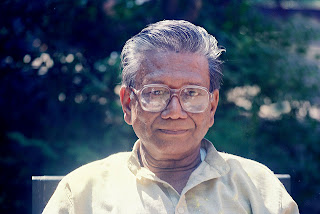 
I am very pleased  that The Reading Life was recently recommended by The Economic Times of India,. the leading financial daily of The Subcontinent.

This is my eighth  post for a  new permanent event on The Reading Life, short stories of the Indian subcontinent.   There is no literary culture with roots older than that of India.   I will always admire Edmund Burke for telling the English that they had no right to govern a region whose culture is much older than theirs.        Some of the writers featured will be internationally famous, such as Salmon Rushdie, Saadat Manto,  and R. K. Narayan but most of the writers I post on will be authors on whom there are no prior book blog posts.    There are numerous books and academic conferences devoted to exploring the colonial experiences of India and Ireland and I will look at these stories partially as post colonial literature.   My main purpose here is just to open myself up to a lot more new to me writers and in this case most will be new to anyone outside of serious literary circles in the region.  Where I can I will provide links to the stories I post on but this will not always be possible.

Manoj Das (Orrisa, India, 1934) is considered on the of the greatest of contemporary Indian short story writers.   He writes in English, as this story was, and Oriya.


Set in a nursing home in India whose patients come from affluent families, it is a wonderful very wise moving and completely non-patronizing account of the life of a once formidable woman now confined to a home, with few visitors as her mind diminishes and as her world closes in on her.   As far as I know this story cannot be read online (I will include a link to a webpage where you can read some of his other stories and essays) so I will just post briefly.


Miss Moberly is in her mid-eighties.   She never married and never had any children but she did have three love affairs.   One with an older man, a very good catch, who was on his way to marry her when his boat sank, and two other less than fully respectable affairs..    She loves to sit on her verandah and have her tea brought to her by one of the servants.   One day she accidently drops some food and a dog grabs it.   She soon throws the dog food every day, she names him after the suitor who drowned and attributes the personality of the suitor to the dog.   Soon two more dogs start coming and she names them after the other two men in her life and gives them their personalities.   One day some of her friends in the home come to visit and she tries to show them how she can throw food to the dogs, it is the biggest and maybe only pleasure in her life left.    When she shows them how good she is at throwing food right to the dogs, they laugh and say it is the skill of the dogs in jumping.   Then in a really shocking move, which makes perfect sense upon reflection, she steals a gun from another resident and plans to shot one of the dogs, thinking like one of the men she loved, he deserves it. This would prove her skill.   I will leave the rest of the plot untold.


A great deal about Manoj Das can be learned on his official webpage.


Born at Shankari, Balasore, Orissa, Manoj Das is perhaps the foremost bilingual Oriya writer and a master of dramatic expression both in his English and Oriya short stories and novels. He says that characters follow the theme of a story and the words are merely added by author to represent the thoughts of the character. That is the precise reason why Das's persons in fiction are from so many varied backgrounds and display many different dimensions of human nature. He is a philosopher, a thinker-writer whose works can be defined as quest for finding the eternal truth in everyday circumstances. He is settled as an ashramite of Sri Aurobindo Ashram, Pondicherry since 1963, and is an English professor at the Sri Aurobindo International Centre of Education, Pondicherry, and is presently concentrating on writing novels.
Among his other important positions are Member, General Council, Sahitya Akademi, New Delhi 1998-2002 and Author-consultant, Ministry of Education, Govt. of Singapore, 1983-85. He received recognition in the form of the Sahitya Akademi Award, 1972, in English; Orissa Sahitya Akademi Award, 1965 and 1982; Sarala Award, 1981; Vishuba Award, 1986; and Sahitya Bharati Award, 1995; Saraswati Samman, 2000; Padma Shri, 2001.