Listening To Dust by Brandon Shire 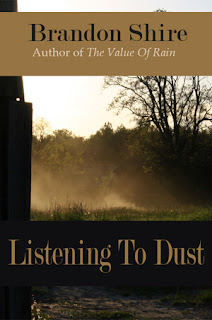 Last year I had the extreme privilege of reading and posting on the debut novel of Brandon Shire (USA), The Value of Rain  In my year end review I listed it as among my "Big Reads" of the year, and this was in a year in which I read Gone With the Wind and Les Miserables.

The internet is full of  intense general praise for Shire's second novel (I hope I live to see him write twenty more so I can see him develop into one of America's great writers.)    Rather than just reviewing the book I will instead focus on what struck me  personally and things I have not seen mentioned in the numerous other lauding posts throughout the book blog world.

It is the story of the relationship of two men, in their mid to late twenties.   One from London and the other from the southern American state of Georgia.   As I read this work I could not help but think of Henry James and his many works that treat England and Europe as bastions of sophistication and culture and American as a place of naivete if perhaps greater raw energy.   On first impression this may be what you may think Shire is also saying deep within his work but you would be, just as I was very wrong.  Shire knows things that Henry James did not or was afraid to say.   The American is an ex-soldier staying in London for a while to observe trains  for his mentally handicapped brother who has a fixation on trains.  (OK I know you are confused now  but read the book!).   He encounters a local man who often cruises the streets for sexual partners.   He knows this is dangerous and that is one of the reasons he does it.  The other is that he can tell himself he is somehow socially or intellectually superior to the men he encounters and this for him reduces it to just a physical encounter.  The American has a rough look to him.   As they go back to his place the Englishmen wonders if he is putting himself at risk to be killed by this to him brutal seeming stranger.   He was shocked as was I when the American makes reference to an "Orwellian" event.    He never expected this from one of his encounters and even more so with an American with a country accent.

The book is structured in a very interesting way which I will talk a bit about as best I can.   The American after several months of every closer bonding with the Englishman goes back to Georgia to take care of his brother, who is mentally handicapped.     The Englishmen writers him nearly daily (this for me dates the story as prior to 1990 or so when they would have E-mailed each other) but he never gets an answer.   He decides to travel to Georgia to find him and discover why he never heard from his lover.    The story is from three places, from Georgia mostly in a small town diner, from London and from the south of France.   After the Englishman's parents were killed in a terrorism style attack he went to live with his aunt Colette in France.  (Of course this is meant to make us think of Colette and the English and American views of France.)

I really do not want to tell you  the very terrible thing he discovered when he went to the American's home town so I will not.   One thing he does discover is the terrible homophobic atmosphere in which the American was raised and the horrible reaction of his father upon discovering his son is gay.

One of the details   I liked best was the character of Miss Emily, a bit of southern stereotype.   She did her best to shelter Dustin, the American, from the cruelty of the town.  In a conversation I loved in the diner she tells the Englishmen how Dustin was always reading, how he loved books.    In backwoods America loving to read versus loving to race stock cars in demolition derbies or drink until you pass out was nearly enough at the time to cause one's masculinity to be suspect and would make you an outcast.  The scene in which Miss Emily offered the books of Dustin to the Englishman was very moving and showed a great depth of understanding of the connections of some deeply complicated matters.

I really liked how Shire flipped back from London to Georgia and back in time.  The scenes in the small town diner in Georgia were just flat out brilliant and completely real.

I really loved this book.   I totally endorse it with the observation that parts of the book are at least R-rated.    I think it could be made into a great movie.  Parts of it are very brutal and terrible things happen.   Anyone who has ever felt others thought they were strange, gay or not, can directly relate to this book.   It has a lot to say about the nature of reading.

On his very well done webpage Shire has information about his other works and his involvement with LGBT youth organizations.

Shire has another book at press, Afflicted, which I am greatly looking forward to reading.

Beautiful review, Mel.
You are the first I see reviewing him though and I'm very glad.
I will put this on my wish list.
have you read French author Philippe Besson? I think you would like him.

Caroline. i have not yet read any works by Philippe Besson. I downloaded the kindle sample of his Absence of Men and it certaintly starts very well. Thanks for this suggestion and your comments.

Thank you so much. It is an honor to be here among so many great writers. You have, once again, humbled me.

Thanks for the recommendation - it sounds a powerful book and I will look out for it!