"Old Man at the Bridge" by Ernest Hemingway


The Short Stories of Ernest Hemingway
A Reading Life Project 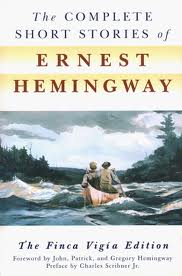 "Old Man at the Bridge" is one of Hemingway's early short stories. It is set in the war against the Fascists in Spain.    It is  a terribly sad very beautiful story about the consequences of war in the life of an old man.   The story is told in the first person by a man whose is assigned the duty of discovering how far the enemy has advanced.   He comes upon a man in his mid-seventies.   He asks the man what he is doing.    He tells him he had to flee because of the advancing soldiers.   His only concern is for the animals he was caring for.   All the old man had was his animals, he stayed until he was ordered to go.

You can read the story if you like.   There is deep pain in the last lines:

"the fact that cats know how to look after themselves was all the good luck that old man would ever have".   I think I know what that means and I kind of wish I did not.   This is a great short story.

Can't say I have a favorite. I am a fan of them. They may well be his best work, though I think Sun Also Rises and Old Man and the Sea are wonderful.

One of the stories I recently re-read and loved was A Clean Well-lighted Place.

This is a story of an old man who hasn’t been able to catch a fish for last 84 days. People start calling him “Salao”, worst form of unluck and make fun of him. A young boy believes in him and goes to fishing with man as he believes there’s a lot to learn from old man. Although he has to go for fishing with some other guys at end because of his parent’s will but he’s unhappy about decision and wants to be with old man. On 85th day old man goes alone and he catches a fish (which turns out to be a giant fish). Story turns around then when man has to spend 3 days in water and fish is not giving up to be caught. Old man eats small fish this time and he gets bruises in his hands. He thinks he’s going crazy and asks to be clear in head. He has slept very less. He talks to fish and consider him brother. How old man saves himself and fish from sharks.
To me this is a story where author has tried to explain how we constantly keep on fighting and explaining our inner friend/enemy. Where we explain why we did this, especially wrong and how much it matters to our lives. This is not just about my happiness or your hurt but many others whom we are treating.