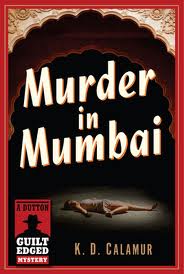 Murder in Mumbai  is the debut novel of K. D. Calamur.    It a welcome edition to the growing body of Indian literature that deals with the contrast of old and new India, rich and poor, west and tradition.   It centers on a murder investigation.   In a city of 14 million or so not all people are equal and not all murders are either.   The murder of an American business woman, a high level executive at a Mumbai company is a very high priority case as it might cause westerns to shy away from locating businesses in Mumbai.

There are two main characters, one a police detective and one a journalist working the crime beat for a major newspaper.   The real central character in this novel is the city of Mumbai, once called Bombay and still called that by many who live there.   Mumbai is India's most populous city with over 20 million residents (it is the most common city of residence in the world for a visitor to my blog).   The central population of Manila, where The Reading Life is based, is estimated at 11.5 million and the greater metropolitan area is estimated at 25 million so I can relate well to novels set in Asian mega-cities.    It is the center of the westernization of India with many western companies locating offices there to take advantage of the huge pool of highly educated low cost workers.   There is old wealth and new wealth but most of the citizens are in huge slums or near poverty.   I really liked it when one of the characters says the city is divided into people who think of themselves as from Mumbai and others who take pride in being from Bombay.    I admit I laughed out loud when the journalist in the story said sometimes he thinks of Mumbai as a village of 20 million where the only way to get anything at all done is by knowing someone as for sure I knew exactly what he meant.  In the city of this novel, everything from getting a job to getting married down to where you get your bottled water from depends on who you know.


In Murder in Mumbai, through the process of  the murder investigation and a related theft case,  we get to meet top Indian business executives, see how a police investigation works (as a matter of course suspects are beaten), we get a look at how a newspaper works and  a feel for Mumbai.   Mumbai has been to a large extent by the huge western presence,  freed of the old boundaries of caste, religion and sex but in the process the citizens have been cut loose from their cultural anchors, given only greed and consumerism to replace them.

The process of the murder investigation was very interesting and kept my attention.  I thought the policeman (an honest one which we are given to believe is an extreme Mumbai rarity) and the journalist were well developed characters.   We get to see the city through both of their eyes.

I really enjoyed read this book.  It kept my attention and I did not guess who the killer was before it was revealed but it made perfect sense.

I endorse this book to anyone who likes a good crime novel and I hope to read more works by K.D. Calamur.

K.D. Calamur is an editor at NPR in Washington, D.C. He was brought up in Mumbai, where he began his journalistic career. His debut novella, Murder In Mumbai, is being published by the Penguin Group’s Dutton Guilt-Edged Mysteries. Calamur lives in Arlington, Va., with his wife and their dog.

Great choice, great review, Mel! I have read a couple of reviews of this book on other blogs. Your perspective of Mumbai is spot-on right down to give-and-take to get work done. Bombay, as I still like to call it, is both a frustrating and a fulfilling city, depending on your experience, and like New York half the world is here, in terms of its rich and varied diversity. Coming back to the novel, the police-journalist nexus in Bombay is a strong one with the latter cultivating the former for crime stories, a trend that has been widely adapted by Bollywood.