The Crying of Lot 49 by Thomas Pynchon 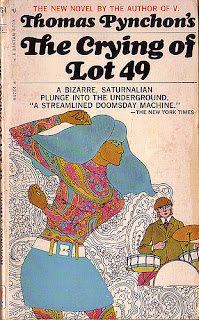 Thomas Pynchon, in my opinion, is the greatest of all American novelists.   Gravity's Rainbow gets my vote as the greatest American novel.   I would love for Pynchon to win the Nobel Prize so we could see who he would send in his place to make the acceptance speech.   I first read The Crying of Lot 49 just before Gravity's Rainbow was published in 1973.  I was completely mesmerized by Gravity's Rainbow and I read it back to back several times in a row.   It is the book I have read the most times.  I have a first edition of it that would have some value were it not totally ready to fall apart.   I know this is a commentary on my state of mind in 1973 as much as anything else but I have read GR times over the decades since then several times and my opinion of it goes up as time goes on.    I would for sure put it among the top ten novels of all time.

I think I have probably read The Crying of Lot 49 maybe four times, the last time about four years ago.   I read it again last week and I loved it more than before.  I will not retell the plot (if you are just looking for homework help to avoid reading the book, check Wikipedia) but just say a bit why I like it so much as best as I can.

I like it for its description of American culture in the 1960s.   I like the character of Oedipa Mass and how she discovers a whole alternative America.   I love the account of alternative postal systems and their histories.  I enjoyed the Elizabethan tragedy about postal systems.    I like how Oedipa comes to find huge groups of "outsiders" communicating with each other via the  W A S T E system.   I stand ready to wait for silent Tristero's empire to rise again. 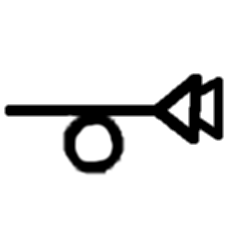 Parts of The Crying of Lot 49 have helped me to understand better the work of Desmond Hogan, an author I greatly admire and have been reading a lot lately.

I would recommend The Crying of Lot 49 as a first Pynchon.   The story is pretty linear.   The prose is not that dense.   If you like this book I would say dive into Gravity's Rainbow, it is not as hard as people say.   It is in part, x rated is my only warning on it.

I will, I think, shortly reread V, Pynchon's first novel.

look at that groovy, groovy cover. The funny thing is that it is appropriate to the book, mostly.

This is the easiest one to recommend, isn't it? The linearity makes the book easier. It is almost a picaresque, one great, strange adventure after another.

I love the Elizabethan play. The last time I read this novel I was immersed in revenge tragedies. Pynchon's is perfect.

Amateur Reader (Tom)-it is the cover on the edition I have and of all the several covers it is the best one for sure. The play is great. Thanks for your comment.

Oh dear, my first Pynchon experience is not good. I first read The Crying of Lot 49, and I didn't enjoy it. Not my cup of tea.

I have yet to find a copy of Gravity's Rainbow. Maybe that will be a better Pynchon experience.

And oh, for me, I think the greatest American novelist is William Faulkner. But if we are only talking of living American novelists, I'd go for Cormac McCarthy or Don DeLillo (I also had a bad experience with Philip Roth).

Angus25- Faulkner for sure one of the great American authors. I have not yet read any DeLillo. on mccarthy i read the road and i did not really like it that much. Thanks so much for your comments

Thoroughly enjoyed this book & V, the last time I was reading Gravity's Rainbow, I had an accident (not whilst reading it) & broke my wrist & had to lay it to one side as I couldn't physically hold it due to the injury.

I'm not sure he'd get my vote for best living American author, but when I first read this back in my under-graduate days I put a black marker in my backpack and started drawing that little muted trumpet symbol all over campus.

Parrish Lantern. I hope to reread V soon, maybe G R also and Against the Day

I started with Pynchon the other way round, with GR. I had a couple of false starts with it, particularly the first 50 odd pages. But once I got past them I was a psychedelic ride.

wordsandpeace- i read your post, very interesting and insightful take on 49

WordsBeyondBorders- I first read 49 before GR appeared by i would say others just plunge in as you did.