A Small Inheritance by Pat Jourdan 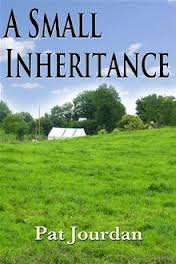 A Small Inheritance by Pat Jourdan begins in England and ends in Ireland.  Kitty was born and raised in the loyalist  Ireland but moved to England for better opportunities and because she just wanted a change in her life. As the novel opens, Kitty's luck seems to be running out, her husband tells her he has a serious girl friend (leading her to ask "you mean there were others") and he is moving out.  Kitty quits her office job and moves to a flat above a laundromat where she has a part time job.   Kitty wants to retreat from the world, begin a new life.  "A job in a launderette, with flat above. It was a type of secret life. No one would look for her here and nothing would happen. It was a reverse way of beginning a new life, like a hermit crab backing into its shell."

Suddenly she gets a letter from a solicitor saying she is the co-inheritor of a house with land in rural Ireland as named in  the will of Ursula Brennan, of whom she has never heard.  She is of course mystified  but she basically has nothing to keep her in England so it is off to Ireland and a new way of life.  She does not tell anybody she knows about this she just leaves for Ireland, wanting to start a totally new life there.   By this time I really liked the character of Kitty and I wanted to see how this would work out for her.  A mysterious inheritance is found in many novels and often leads to undreamed of changes and adventures and that is just what happens to Kitty.  Kitty grew up in Ireland but left for England and more opportunity as soon as she could.  These lines from her mother sum up much of the sadness and underlying bitterness of the Irish emigrant experience:

"“People go over to England,” her mother said years ago. “It’s waste of a stamp, they change addresses like wildfire over there. I’m not going to bother. He’s never really been part of the family. He appeared out of nowhere, from the North, you’ll never find out about him.. No use whatever. Plus, you don’t know what he’s been up to over there. We won’t be told, they get up to all sorts.”


The depiction of her arrival on the property in Ireland and her meeting with her co-inheritor are just brilliant.  Her co-owner is odd on top of odd, a confirmed old bachelor who soon begins to feel people will spread scandal about him when Kitty moves in the property.  We soon find out there is more to him than meets the eye.   There is also an interesting sub-plot about a returning from Nigeria cousin.

The plot action of the novel is about Kitty and the people she gets involved with in Ireland.   She has some interesting adventures, skirts some legal problems and is not above a bit of a romance.  I think what this novel is really about is the corruption of Ireland brought about by the rise and then sudden fall of the period of economic high commonly called the Celtic Tiger.   It is about turning Ireland somehow into a travesty of itself as an amusement parlor for tourists or turning the Irish into tourists into their own country.

The novel is also about Kitty trying to come to terms with her Irish heritage.   These lines explain part of the import of this to the novel:


"British statesmen have an incurable propensity for playing the fool in everything that affects Ireland. By a piece of monumental stupidity the cabinet has converted Dr Mannix into an Irish national hero. His exclusion will of course be keenly resented by the Catholic Hierarchy in Ireland. The stew of items threw up details of how the country was being pulled in all directions at once. Independence that had been ratified in January 1919 had to wait until December 1922 to be recognized  Kitty was learning more about history here and now from these yellowing papers than all the schoolteachers or lecturers with their planned lessons."

I have lately begun to do word searches in the books that strongly interest me, as does A Small Inheritance.  I am not sure what this means but I think we can see something of the nature of a literary work through this method.  Here are some results for A Small Inheritance.

The novel contains many wonderful lovingly done descriptions of the natural beauty of Ireland.

There are some exciting plot developments, some that will worry you a bit and one at the end I really thought was funny and sad at the same time.   Lots of things happen and I do not want to spoil them for you. This novel will keep you very interested,I am sure.

I greatly enjoyed A Small Inheritance.  The characters are very well done and I was very interested in Kitty.   The novel does have a bit of an old-fashioned feel to it and I will declare that to be quite a good thing!


Pat Jourdan grew up in Liverpool and has lived in Ireland for several years. Trained as a painter at Liverpool College of Art, she has had several exhibitions in both countries. Her paintings feature on the covers of her books, as well as those of Orbis, Crannog and Microbe. In 2000 an exhibition of poetry and paintings, The Life Class, was held at the Davis Gallery, Capel St. Dublin.

Pat's latest book, Citizeness is a collection of poems that begins with Madame Defarge sitting knitting and continues with protest movements from there onwards. We cover the movements of troops through Shannon Airport while an aid worker drinks her coffee and end with a rendition plane drifting over an exclusive London flat. As you read tomorrow's papers,if you want to be "On the Run with the Mad Idealists," this is the collection you need to take with you. You can buy Citizeness via the online shopping facility below.
You can learn more about her work on her webpage.