Spirited Away-A Novel of the Stolen Irish by Maggie Plummer  (2012, 211 pages)
My Posts on Irish Literature 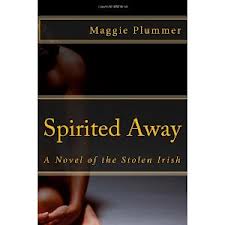 I am on an e-mail list that notifies me of Kindle books which have had their prices dropped or even eliminated  for brief period.   It is a marketing device and up until yesterday I never took advantage of any of the offerings.  Then I saw a book, normally prized at $11.95, was reduced for one day only to $0.00.  It was described as a meticulously researched exciting book about a girl of thirteen and her eleven year old sister who were sent as slaves from the west coast of Ireland by the soldiers of Cromwell's invasion.  During the 1650s Ireland lost about 41 percent of population to murder by the English and about 50,000 people were sent as slaves to work in the plantations of the new world, mostly in the Caribbean.  Thinking why not I downloaded Spirited Away-A Novel of the Stolen Irish by Maggie Plummer (Montana, USA) onto my e-reader.  I quickly became  absorbed in this fast reading  work and read it almost straight through because I was fascinated by the research and I was made interested in the fate of the two young girls that were stolen from their families to be slaves.

The girls make a harrowing passage across the Atlantic to Barbados.   It was very interesting to learn about the horrible lives of slaves on a sugar plantation.  The girls capture a premier price because they are virgins and the slave auction was depicted in all its despicable detail, including stripping the older girl naked for a virginity check and then branding them after purchase.    The sisters are bought by different plantations.  Plummer does a very good job of creating the girl's personality and making us care about them.  Slave owners had full sexual access to their slaves and could rape or even flog them to death without breaking any laws.   The plantation owners were all protestants and hated the Catholic Irish.   The plantation owner, maybe a bit of a one dimensional portrayal of the owner of the plantation and his monster daughter, rapes any of the new slave women he takes a fancy too.  He sees himself as enriching his holdings by making them pregnant with new slaves.  There are stock characters.  There is Paulina, the slave woman mistress of the owner who lords it over the other slaves, the cruel slave driver, himself a slave, the English butler and his wife who runs the household.

There is lot of to learn in this novel and some interesting things happen.  We learn a lot about day to day life in Barbados in the 17th century, what they eat, how slaves were treated and punished and mated with each other just like cattle.    Irish slaves cost less than Africans so they were treated worse and the English owners hated the Irish in a way they did not other slaves.   We also meet an American Indian woman, from the Virginia area, who was a slave and befriended Freddy on the plantation.  There is a sub-plot about an escaped Irish slave, a young man named Colin, who turns pirate that those who like sub-plots about pirates might enjoy.

Some Amazon reviewers said this book reads like a romance novel and I can see that comment being justified at times.  As I read of the tropical fruits eaten by the people on Barbados I was not sure the data about the historical migration of fruits (for example when did the Mango first reach Barbados from Asia  (it is native to the Philippines and India) would support some of the meals that occur but that is a pedantic point I concede. I have studied fruit migrations so I am sensitive to this.

There are exciting slave revolts.   There are romances, we have to accept that 14 or 15 year old Maggie has the passions of a grown woman to accept to the romance sub-plots with Africa slave men.

I enjoyed this book.  I learned from it and it kept my attention.  It is a first novel.   I would call this "light-reading" historical romantic fiction.    The reviews on Amazon (there are over 100 of them) go from five to one star.  Those who do not like it see the plot as cliched, the characters one-dimensional and pick apart the historical details and this is not entirely unfair.   I saw it as a good work to get the feel for an era of history I knew little about.  It is a fast read.   I would be happy to read another historical novel by Maggie Plummer
Mel u
The Reading Life

I doubt I will look on this book as more romance than reality. It sounds so very harsh that for me it would be a difficult book to read - though it is in essence factually what happened.