Someone At a Distance by Dorothy Whipple 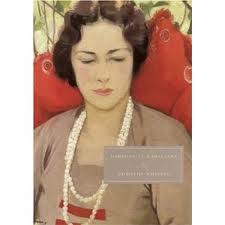 Dorothy Whipple is a highly regarded UK novelist (1893 to 1966).   I believe Someone At a Distance is her most still read work.   I am glad I have now read one of her novels.   This is a very well written book.   There are five important characters.   Ellen and Avery, an English couple seemingly very happily married, their two children and a French woman named Louise.    Avery's mother, getting along in years had advertised for a helper/companion at Louise saw the ad advertisement and went to work for her.  After a while she goes back to France until she gets a letter saying the mother has left her 1000 pounds (a huge amount of money then) in her will along with furs and jewels.   She goes back to collect the money and the other items.   She starts an affair with Avery (this is not really a spoiler as the publisher gives it away on the back cover) and ruins a twenty year plus marriage.

My over all reaction to this book is mixed.   I see the very acute psychological insight of the author and I admire her elegant prose style.   I did begin to find the novel to lose its interest about half way through.  I .   Whipple's handling of how the breakup of the marriage effected their children is brilliant.

I think the part of the novel I liked best was the depiction of the French parents of Louise.   The question remains open as to how such loving parents could produce such a nasty daughter.    I guess in the context of 1952 this novel could have be seen as a bit of a slam on the French.

I do totally commend Persephone Classics for the very high production values show in this edition.  I see now why people love their books so much.

Here is what they say about the author on their webpage

Born in 1893, Dorothy Whipple (née Stirrup) had an intensely happy childhood in Blackburn as part of the large family of a local architect. Her close friend George Owen having been killed in the first week of the war, for three years she worked as secretary to Henry Whipple, an educational administrator who was a widower twenty-four years her senior and whom she married in 1917. Their life was mostly spent in Nottingham; here she wrote Young Anne (1927), the first of nine extremely successful novels which included Greenbanks (1932) and The Priory (1939). Almost all her books were Book Society Choices or Recommendations and two of them, They Knew Mr Knight (1934) and They were Sisters (1943), were made into films. She also wrote short stories and two volumes of memoirs. Someone at a Distance (1953) was her last novel. Returning in her last years to Blackburn, Dorothy Whipple died there in 1966.

Please share your experience with Dorothy Whipple with us.

I am glad I read this book.   I would suggest you try to get a library copy of this book because I do think some will get a bit bored with it as I did around mid-point.

I've read this twice and absolutely loved it both times. I think it's a real insight into the lives of women like Ellen, and the choices they had available in that era. The style comes across as maybe a little dated, but the emotional observations I find very accurate. I also love the author's understated way of writing. I've read a few other books by Dorothy Whipple, but this one remains my favourite.