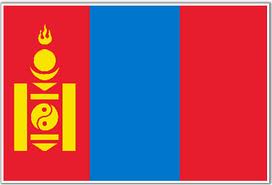 Project 196 is my attempt to read and post on a short story by an author from each of the 196 countries of the world.  So far I have posted on stories from 28 countries.  I am discovering a lot of new to me writers, including some I for sure want to read more of, and learning more about the short story as a factor in differing literary cultures. 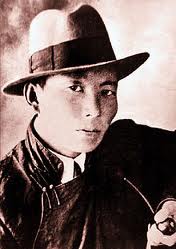 "Unseen Things" by Dashdorjiin Natsagdorj is my first exposure to work by a Mongolian writer.  My guess is outside of Genghis Khan very few people could name a Mongolian personage of note.  I know for sure I could not until I was edified  by one of my readers from Mongolia.

One of the wonderful benefits of having run my blog for a fairly long time now is that I have a  network of people who know a lot more than I do that I can draw on for advise on all sorts of literary topics.   One of the long time readers of my blog is, I think, the only book blogger in Mongolia.  The blog is in Russian which I do not read and Google translate cannot handle it very well so I am not able to read the posts on the blog (I will leave a link to it and to where you can read the story at the close of the post).  One time the blog owner left a comment on a post I wrote so I answered them with a request for names of the highest regarded Mongolian short story writers.  They responded that there were lots of great writers but most write in either Russian or Mongolian and few are translated.   They did provide me with the name of the first modern short story writer from Mongolia, Dashdorjiin Natsagdorj (1906 to 1937) and a link to some of his stories in English.    A bit of research opened up the world of Mongolia in the 1930s to me.   It was time of transition from a purely agrarian and animal herding society ruled by tribal khans to a communist society. During the transition period there was a long period of tremendous turmoil in which there was little law and order and bands of marauding thieves  and killers masquerading as political activists.

The story is told in the first person by a young man who was looking forward to working as herder along side a woman he shyly admired.   He sees approaching a group of men.   They are heavily armed and some are dressed as if they were Buddhist monks.   They capture and tie him up and demand to know his political loyalties.  He is a simple person and really is just trying to survive.  He sees the woman he likes approaching and he warns her to ride away as fast as she can but the men capture her also.   They talk among themselves whether or not they should just kill them.   They decide to take them to their base camp and they have a lot of other prisoners there, all of whom fear they will be executed.  Telescoping a bit, the prisoners leap for joy when they see the People's Army (Communists) approaching them and their captives flea in terror. 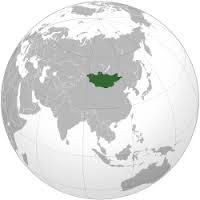 "Unseen Things" by Dashdorjiin Natsagdorj  was a story written with a political purpose, to praise the Communists.   To do otherwise would have been very dangerous.  It is for sure worth reading for those who want to expand their range of reading beyond the normal and it is an excellent miniature history lesson.  The story I read was clearly translated by someone whose first language was not English and who was probably taught English by someone other than a native speaker but it does give us access to a wonderful look at the past.

Dashdorjiin Natsagdorj   is considered one the leading Mongolian writers.  He began his writing career at age 11 working for the military.  Literate people were very scarce at that time.  He founded the Mongolian Writers Union and wrote short stories, novels, plays and lots of journalism.   He lived for a few years in France and Germany.  He was place in prison for a short while in Mongolia when his views were considered not in accord with party ideology but he was soon released.  He dies of natural causes at 37.


. Dashdorjiin Natsagdorj has a long title - Secretary of the Political Bureau, Member of Government, Ambassador – in addition to being the founder of Mongolia’s modern literature. Born in 1906, Natsagdorj lived for just 31 years.

”From 1930, he was troubled by leftist ideologies and was arrested and jailed under the pretext of celebrating the New Year of 1932,” says the biographical section of a book of his selected writings published in 1961. He was released in 1932, but the worst was yet to come. In 1935, “his wife was sent back to Leningrad with their daughter Ananda Shri,”

Nine Chistyakova and Natsagdorj had known each other since Natsagdorj was a student in the Military Academy at Leningrad. They married after he was released from jail.

”His wife and daughter went from Ulaanbaatar by ox cart on Altanbulag Road to the border of the Soviet Union, and from there went by train,” told Dr. L. Dashnyam, a man who helped Natsagdorj’s daughter, Ms. Shri, come back to Mongolia to live out the rest of her life. But the reason they left is still unclear. “They could have been sent by the government of Mongolia, or Ms. Chistyakova could have herself decided to leave the country because of anti-Russian sentiments in the country.”

Natsagdorj wrote the short story entitled Dark Rock in 1930, which talks about lost souls in love. The story seems a prediction of his family’s separation. Natsagdorj died in 1937, two years after his family left the country.

Coincidentally, or due to fate, a similar reason brought their daughter back to Mongolia in 1992. She had spent most of her life in Tallinn, Estonia. It was another tangle of history, during the political reforms fo Estonia, when Estonia refused to be part of the Soviet Union after Gorbachev’s perestroika, that brought her back.

First, she wanted to go back to St. Petersburg to her mother and younger sister, but life was not easy there, either. Then she remembered that she was originally from Mongolia. “She did not know how to come back, and just opened a telephone directory. She landed on the page of the Mongolian Consulate by complete coincidence. That decided it,” Dashnyam, her friend, whom she called ‘brother’ and ‘father’, stated. The government of Mongolia supported her with a flat and a monthly pension.

Ananda grew up not knowing about where she came from because her mother did not like to talk about Mongolia; she just knew that she was different from other Russian children. In her twenties, Mongolian writers and students in the Soviet Union started to visit her with many presents and paid extraordinary respects to her. From that time on, she began to realise that her father was a great Mongolian writer. But still, it was hard to learn about him because the translated works of Natsagdorj into Russian were poor, affected with Communist ideology.

You can read this and some other Mongolian short stories here

Here is a link to the book blog whose editor helped me expand my reading life to include short stories from Mongolia.  I give them my great thanks both for this and for honoring me by following my blog.

Once and a while they post an article in English or one Google translate can handle.